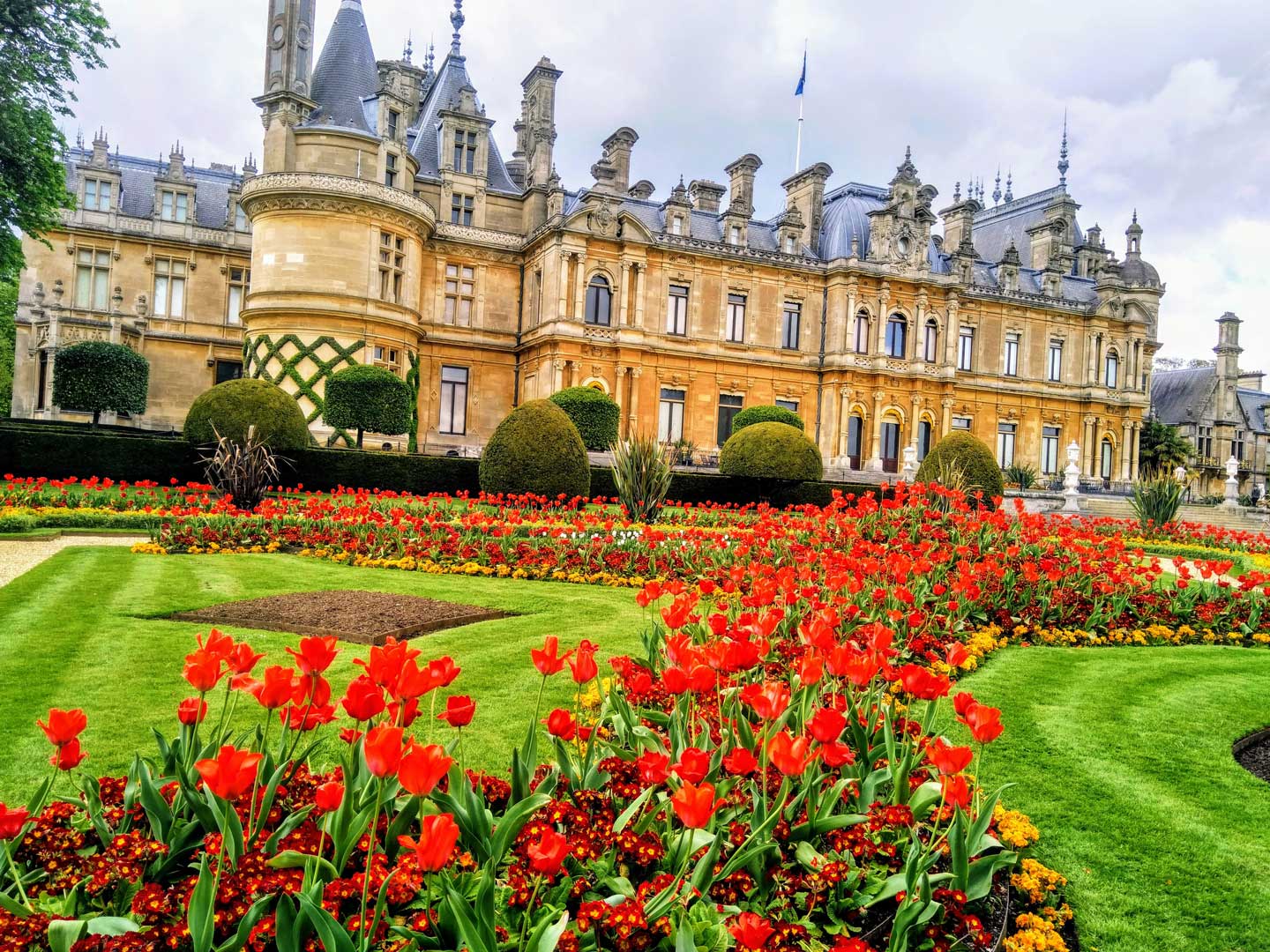 An short drive through emerald greenery ,from the car park, in a Bus brought us to the magnificent palace-like 19th century Waddesdon Manor built above a hill in the beautiful Vale of Aylesbury England. In the after rain glorious sunshine we walked up the  huge gravel driveway to spend the rest of the day looking at the Rothschild family’s luxurious home famous for its treasure of rare objet d’art collections which are surpassed only by the Royal collection at Buckingham Palace and Windsor Castle! The first look of the Manor reminded me of a movie set. We were to find out later that a Sherlock Holmes movie, several popular Television serials and many more Hindi- English movies were filmed here. The Waddesdon Manor that we were about to witness, was built by Baron Ferdinand De Rothschild in 1874 whose each room echoed the elegant French Royal splendor. He fashioned the Manor in the style of the other best and illustrious Chateaux of France to entertain the chic-world. Additionally, the house since the 19th century has,  central heating, hot-cold running water and even an electric Bell system for the servants, all of which were unique to those times! Through the Entrance hall we headed for the ornate Red Drawing room at the heart of the house arranged as it was in 1897! I could imagine the Baron’s guests walk in and out of here to the front Entrance and formal gardens. In the rich red damask walls room we looked out for the 17th-18th century collection- Folding painted panels screen, English paintings, antique and modern furnishings, gilded frames furniture,Tapestry and a fabulously painted ceiling. Seeing the Savonnerie carpet I recalled that its original had been ordered by French king Louis XIV for the Long Gallery of the prominent Louvre palace!

A 19th century Dining table that could seat upto 24 diners was set amongst the grandeur of mirrors, paintings, frames, carpet woven in the Royal factory of Aubusson and curtains. We felt transported backward to the Saturday to Monday, lavish House parties of the Baron in the late 19th century. The volunteer informed that during her visit, Queen Victoria was fascinated by the room’s electric Chandelier and wall lights!

Then we came into the tiny Ante Room where dishes were brought before being taken to the Dining room or the Breakfast room. It was attached to a Conservatory, filled with exotic plants, where the musicians played for the Dinner guests’ .One must look out for the marble items especially the Indian marble chairs- a collection ranging from 17th to 19th century. The largest Chandelier of the house caught our attention as we stepped into the Breakfast room used by mostly gentlemen as women had breakfast in Bed! The room had impressive paneling bought from 2 Parisians homes of the early 18th century.

The East Gallery was an imposing corridor embellished with paintings and unique objects, especially the exquisitely made Elephant and Howdah musical automaton from 1770 that had been well liked by the King of Persia during his visit. Admiring each object we moved through the Oval Hall into the West Gallery which was used by the Baron’s guests to read morning newspapers before 1889.Past Sevres porcelain, Tapestries, 27 beautiful Clocks and classy singular designed period furniture we arrived at the Grey Drawing room.

This was another Drawing room of Waddesdon Manor used after Dinner was over. Sevres porcelain, Sevres plaque furniture, Aubusson curtains, hand woven Tapestry curtains, Savonnerie screen, Reynolds portraits…everywhere there was something.

Baron’s room was the Green Drawing room of that era but has been re-set with the Baron’s original furniture- his Roll top desk, paintings, photographs, art objects and the bust of Queen Victoria gifted to him; just like a museum room!

Once upstairs, we went past the West-Hall and the newer Morning-room to halt at the breathtakingly beautiful State Bedroom where Queen Victoria rested when she visited Waddesdon Manor. The grandeur of the room with the music-box-Clock with 13 musicians and singers inside it, the Wall paneling, the Paintings, 19th century collector item Miniature furniture… all were enchanting!

We entered the Baron’s sister’s Fountain bedroom where besides the 3 Meissen porcelain vases, the 19th century Bedcover from India drew our attention- silk and metallic threads with Peacock being the central motif!

We moved on into the Portico bedroom that was an exemplar of one of the 10 Bedroom suites and 10 Bedrooms   of the 19th century Waddesdon Manor!

We passed through the 1880’s Bachelor’s wing with 10 bedrooms for single male guest, 15 bedrooms for the staff and visiting servants besides 2 rooms for masculine pastimes of Billiards and Smoking!

After browsing through the ‘museum rooms’ we finally reached the Kitchen Corridor which was once a corridor for 24 indoor staff -housemaids, footmen, valets, visiting staff; linking the work area to the main house! The highlight here was the Room Indicator Panel –an Electric Bell system used to call staff to a particular room in the huge palace like Manor!

The Terraces and the Garden Parterre

While in the Manor its large glass windows had revealed these sun drenched Terraces and the Garden Parterre- an attractive formal garden with plant beds, edged in stone and gravel paths; of 15th century French origin. Finally we were here, at the back of the Manor as a nippy evening set in and the sky was streaked with gold and orange! The stunning garden was packed with fountains, statues, flowers and more flowers!

It is said that the Gardens of Waddesdon Manor are famous for changing according to season and whichever season of the year a visitor comes to the Manor one will always see something new and delightful. Since the 19th century Waddesdon Manor is said to hold one of the finest Victorian garden in Britain. In 1890 many large trees were transplanted here and it was such a novel idea for that era that Queen Victoria invited herself over to view the Garden! Since 1957 Waddesdon Manor has been bequeathed to the National Trust of England for the maintenance of its ‘dazzle’ and managed by a family Charitable Trust under the Chairmanship of Lord Rothschild.

After relishing the English tea at the Manor restaurant which was once the Old Kitchen, we ended this impressive experience by visiting the Manor Shop where exclusive marvelous Rothschild Wines are also stocked as Waddesdon Wine Cellars celebrate the family’s famous Wine making tradition since 150 years. The cellars with 10,000 bottles of wine were restored and reopened in 1994 by Queen Elizabeth! 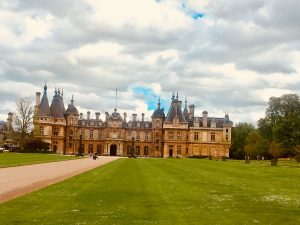 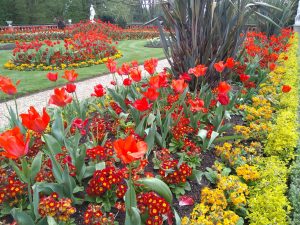 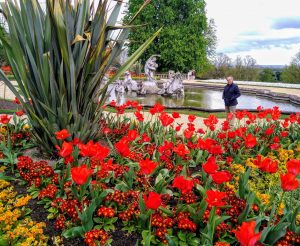 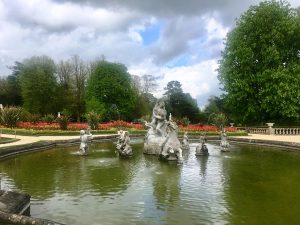 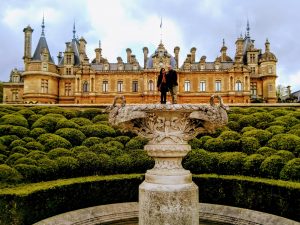 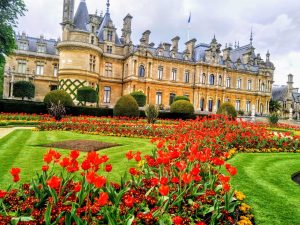 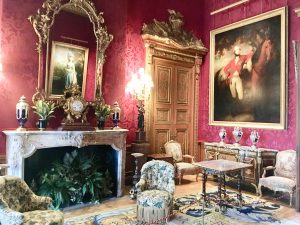 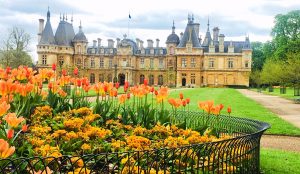 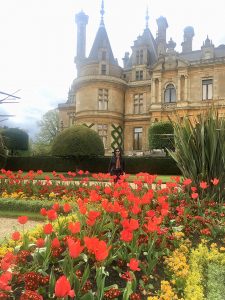 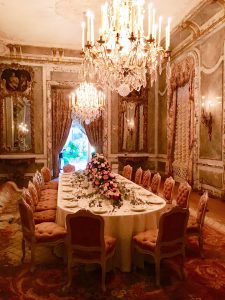 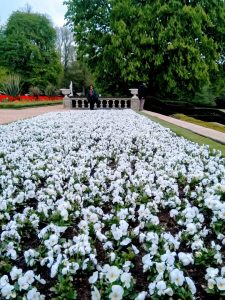