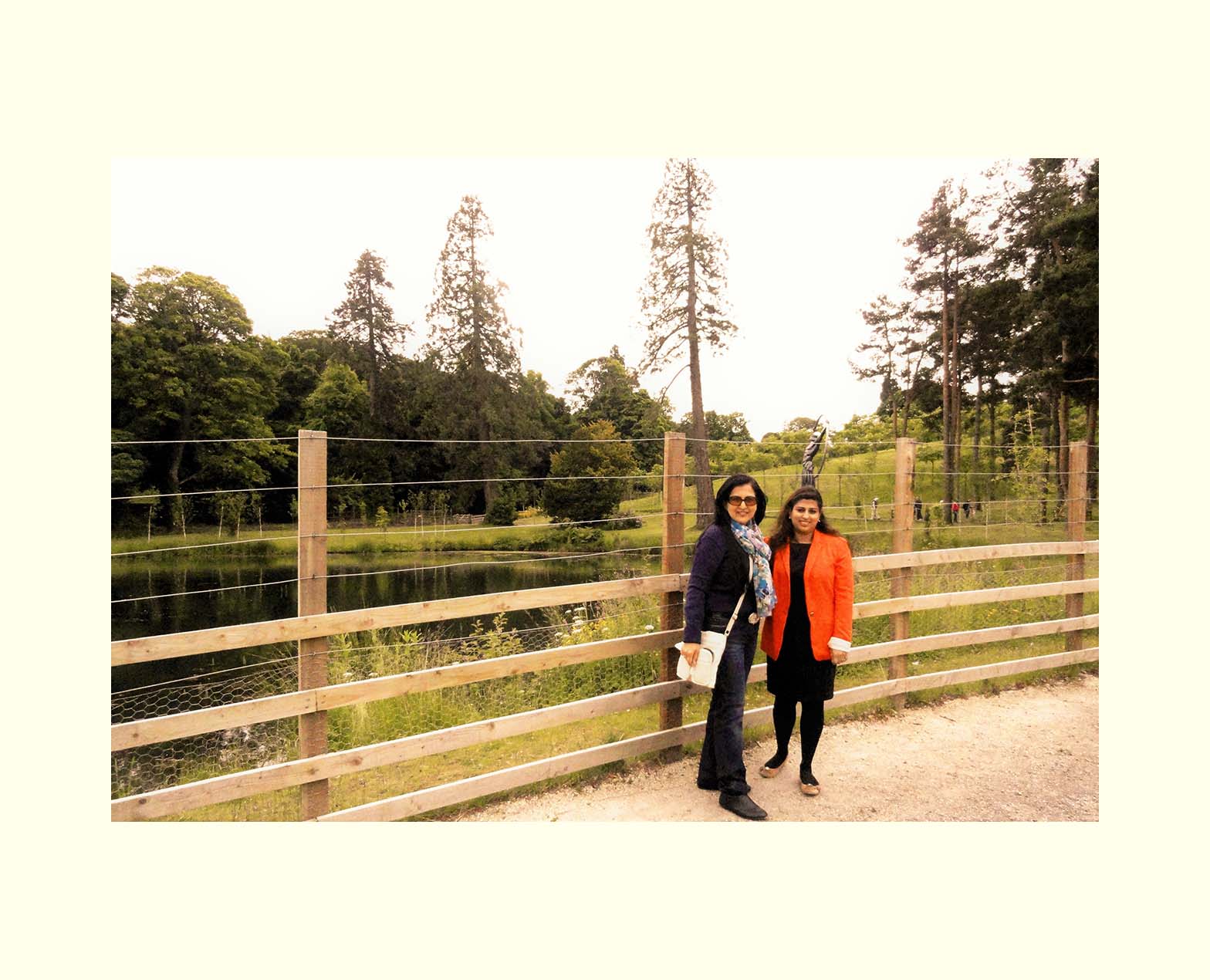 Amongst the many lures of Northern England are several Northumberland Castles wherein each stone, each room, even each tree has a story of its own to narrate! Whilst on a summer-break; we got an opportunity to visit the magnificent Alnwick Castle with its contemporary gardens. Past a narrow bridge on a moat we got the first glimpse of the almost 1000 years old majestic Alnwick Castle. We entered it through the Lion’s arch to explore the art collections within and discover the Harry Potter magic!

We were greeted with large photographs and a message from the Duke and Duchess of Northumberland welcoming all visitors to their family home which is a functional 21st century Castle. The perfectly restored Castle and gardens that we were about to see were in a state of ruin in the early 18th century till its heiress Elizabeth Percy Seymour and her husband – the 1st Duke and Duchess of Northumberland  commenced the restoration with the help of famous architects and garden-designers that carried on for a 100 years! After completing the tour of the spectacular interiors of Alnwick castle we decide to explore its lawns and state-of-art-gardens at a walkable distance from the Castle. From the Octagonal Towers we crossed the lush green slopes of the lawns in the inside part of the Castle- the Inner Bailey to watch two exhibitions in the Postern tower and Constable tower near each other. It was fascinating to walk down an open to the sky, narrow passage – Rampart Walk from where we saw the panoramic view of emerald slopes behind the Alnwick Castle that roll down to the historic ancient river Aln. Alnwick Castle was first built to guard the land – especially a strategic road; near the river! Later we walked to the outer lawns of the Castle – the Outer Bailey where we saw take-offs on Harry Potter plays being enacted with the broomsticks involving a group of students and teachers. ‘Harry Potter and the Philosopher’s Stone’ & ‘Harry Potter and the Chamber of Secrets’ have been filmed here. The Castle is used as a stand-in for the exterior and interior of Hogwarts in the Harry Potter films which has led to an increase in public interest for Alnwick Castle. Other known films shot here are Robin Hood and Ivanhoe, to name a few. The recent most addition is the globally acclaimed television serial; Downton Abbey. It had the added privilege of having the Oscar nominated movie – Elizabeth filmed here too! From the Outer Bailey we headed for the Café past the Coach house that held royal coaches since 18th century. We eagerly saw the Coach used for the present Duke’s daughter’s wedding recently. The atmosphere was informal and welcoming at the Courtyard Café. We were impressed to see the 700th anniversary Dateline-wall outside the Café that mentioned all important historical events that had happened during the lifetime of all Percy descendants from the 14thcentury to the 21st century!

Sipping hot tea,  I read about the other lucrative entertainment games that a visitors could participate in while in the Castle but the best was –  the conversation with the present 12th Duke Ralph of Northumberland about his role as a modern Duke ,which we would have liked to do but our stay was not long enough! We walked back to the New-millennium Alnwick Garden, a very popular venue for the locals and tourists alike. Since the 18th century when Elizabeth Percy Seymour-wife of Duke of Somerset inherited Alnwick Castle, it became their country home who’s one requisite was a Garden with Pleasure-grounds. Down the centuries it has undergone several transformations. Stepping onto the Time-machine I was to witness the personal efforts of the 12th Duchess- Jane of Northumbria and the best Garden designers of Europe to finalize the restoration work! Since the year 2002 modern water features- fountains and lighting has been created here and later Alnwick gardens were officially opened by Prince Charles. Rare view of Cherry-Blossoms in Gardens of Alnwick Castle

Looking around us it was hard to believe that we stood in a Garden that was almost 300 years old. We were fascinated to see an area for a covered Pavilion Garden that could be stay open throughout the year even when it snowed! It was perceived as a greenhouse and for strolling in the bad weather but today it is a popular venue with a view of the beautiful garden, holds a restaurant and a function room as well. The popular large Tree House restaurant perched high upon the treetops of mature Lime trees is a fine exemplar of craftsmanship from different kinds of woods-Canadian Cedar, Scandinavian Redwood and English & Scotts Pine; is an additional excitement for the children and grown-ups alike!

After Windsor Castle, Alnwick is the second largest inhabited Castle of England. Though the Duke and his family live in a part of it but most of it is open to the thousands of visitors who come annually! Besides the film-shoots, parts of the Alnwick Castle, its lawns and gardens are used for educational programs and are a popular venue for exhibitions and fairs. We can surely duplicate the same in our numerous Indian Forts to generate funds for apt maintenance and make them a tourist attraction too! We drove back hoping to come back in Spring to view the Cherry Blossoms avenues and Tulips filled front lawns of the mystic attractive Alnwick castle and gardens from ancient times!