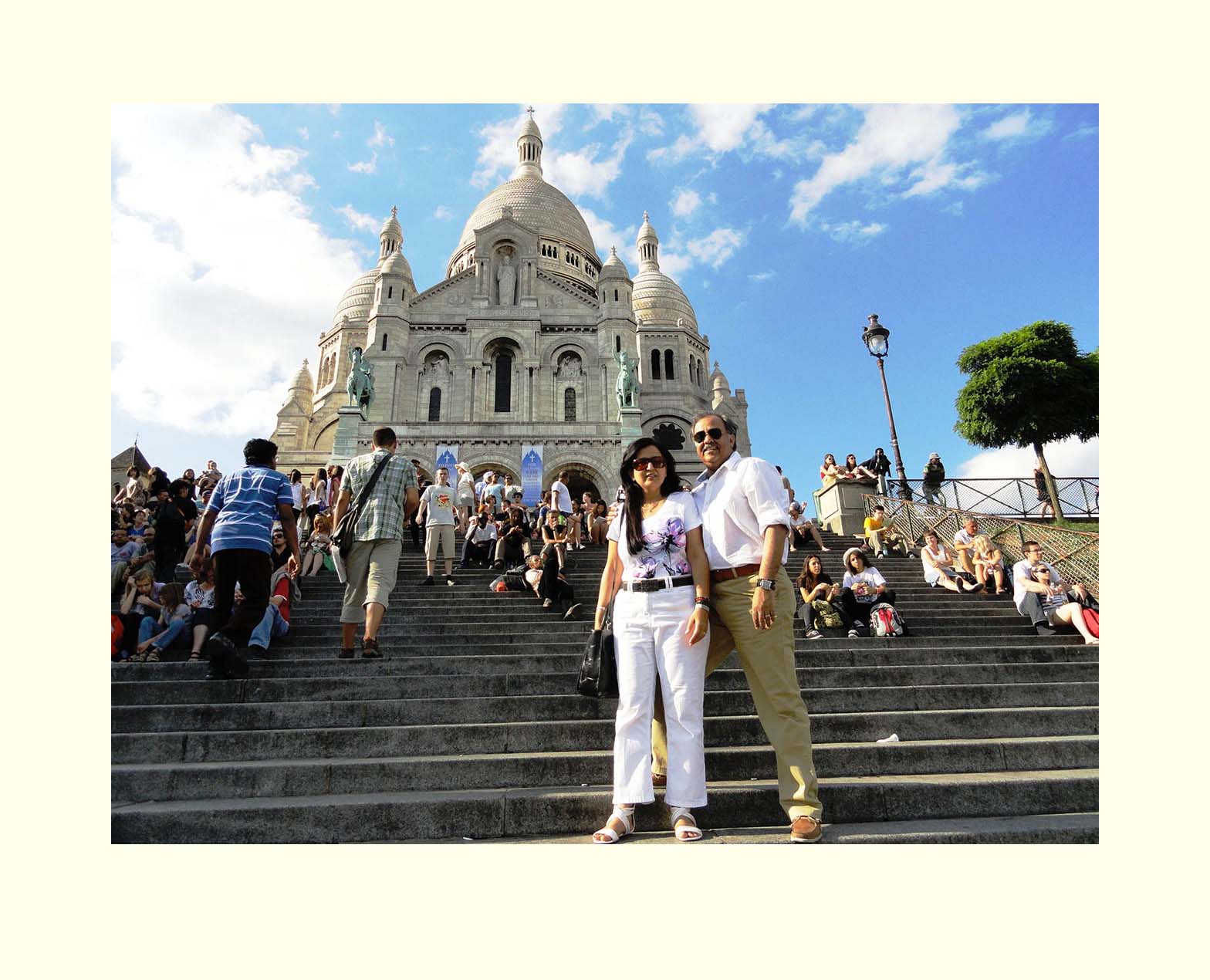 On September the fourth, at an ancient pagan-temple site on Montmartre-hill rose the Church of Sacre-Coeur in remembrance of thousands of   French soldiers butchered in the Franco-Prussian War of 1870, a national penance for France’s defeat! We were at Sacre-Coeur on Montmartre in Paris to visit the ‘Sacred Heart of Jesus”- the highest point in Paris. I recalled reading that it is believed that this has been a sacred site since pagan- time, when Druids worshipped here. Later Romans build temples dedicated to Mars and Mercury at this very spot!! Hilltop view from Mont-Matre and Sacre Coeur of Paris

The panoramic hill town known for the Sacre-Coeur Church, is a haven for artists and for scrumptious French Cuisine! Montmartre is a photographer’s delight and the Church of Sacre-Coeur (Sacred Heart of Jesus) stands at the highest point on the Hill. Spread below, is the spectacular view of the ancient yet so contemporary chic city of Paris and we were just in time for the golden sunset. We busied ourselves with locating the famous Tourist spots from the top of the hill- The Eiffel Tower, Pantheon and many more! Behind us, was the white outline of the several domed, Basilica-Church built as a memorial to the 58000 soldiers killed during the France- Prussia war and prayers continue for the souls of the dead soldiers till today; all through the 24 hours without any break!

We managed to climb the numerous stone stairs; meandering through the throngs of tourists and pilgrims sitting on them regaling themselves with songs, dance, music and the view. Unlike Indian pilgrimages, the sanctity was missing outside but once inside the Sacre-Coeur, the atmosphere was truly divine. Before entering the Church we looked up the triple-arched portico whose top held two bronze equestrian statues of France’s national saints- Joan of Arc and King Saint Louis IX against the backdrop of the deep blue sky. We entered through beautiful Bronze doors with intricate floral carving to witness the dazzling Romano-Byzantine interiors and mosaic of Christ which symbolizes France’s devotion to the Sacred Heart of Jesus. Perhaps noticing my disappointment that photography is not allowed inside, a cameraman pointed towards the open doors leading to the outside corridor of the Church, from where I captured the mesmerizing mosaic! People were climbing up to the Dome of the Church, as it is the second highest viewpoint of Paris from where one could see as far as 48 km on a clear day for an aerial view of the Paris town.

The Main Square is crowded due to the hundreds of tourists who come to watch the fantastic view from the hill alongwith Sacre-Coeur Church. Later, after visiting the Church we discovered the real charisma of Montmartre in its winding cobbled back streets, terraces and small squares lined with attractive facades of restaurants with cheerful awnings, people relaxing with food and wine. Around us were beautiful shop-fronts laden with Souvenirs and Scarves – a Shopper’s paradise. One surely cannot do justice to Montmartre in a single trip! Montmartre is a celebrated home to Painters and poets of the late 19th and 20th centuries whose list is long- Picasso, Dali, Renoir, Van Gogh and Monet. We came across several artists, who offered to do a quick portrait. I was tempted to get my name painted on a roll -with alphabet S as an artistic Dragon, the rest of the alphabets were birds and flowers and A was Eiffel Tower – what ingenuity at work! Writer’s name being painted on a paper roll -with alphabet S as an artistic Dragon, the rest of the alphabets were birds and flowers and A was Eiffel Tower.

Easter and the Spiritual Angle

Special Easter celebrations are in progress at the Sacre-Coeur Church where each day of the Holy week is specially planned Mass prayers commencing with Maundy-Thursday (Jesus’s Last Supper) to the final Mass on Easter- Monday.

The world celebrates the Resurrection of Jesus on the Easter Sunday after his crucifixion on Good Friday, I reminiscence reading that Easter was named after the pre-Christian era Spring Goddess Eostre. A British monk Venerable-Bede, who lived in the 7th-8th century, mentions her in his texts! As per the Christian calendar the Holy month of Lent is observed for 40 days before Easter when one observes penance and fasting that includes Good Friday too. Writer at the medieval monument -Pantheon

According to one theory, it is believed that Jesus was born near the Winter Solstice as the days start to become longer and darkness recedes; his birthday on 25th December is symbolic to ‘ light of the world’  to redeem the world from blackness . He departed after the March Equinox – the first day of the Spring in the Northern Hemisphere. As Spring is symbolic to new life and rebirth so is resurrection of Jesus at Easter!! Writer and her friends at Notre-Dame Cathedral

Likewise Easter eggs symbolize the empty tomb of Jesus, from which Jesus has resurrected. Eggs are traditional symbols of rebirth. Beautifully decorative embellished Easter eggs as well as edible chocolate version are hugely popular around this time. The writer at the Spiritual Sacre-Cour Church- The sacred heart of Jesus; stands at the highest point on the Montmartre Hill.