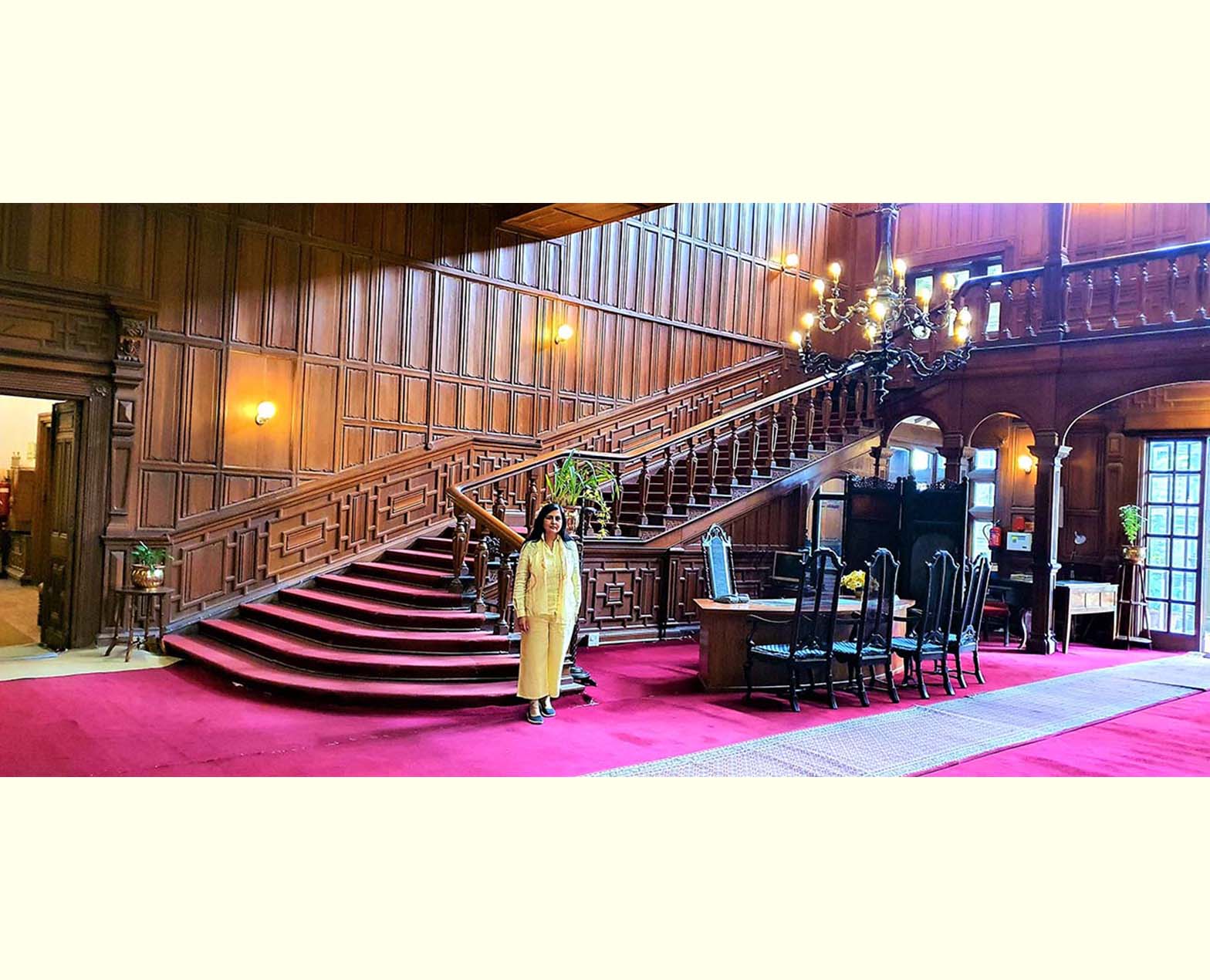 Free India became a Republic with its own Constitution on the 26th January 1950 which is celebrated till today with exuberant parades and ceremonies. This Republic day just gone past and in remembrance of the Mahatma’s death anniversary on 30th January, I would like to share my memories of a visit to the glorious Viceregal Lodge Shimla that holds some of the best reminiscences of India’s independence movement via its photographic & literary collections especially related to Gandhiji. A drive through the splendid flora-fauna of Shimla hills during the incessant summer rain is an unforgettable experience with sparkling, newly washed greenery enveloping the environment! We had arrived at the magnificent Viceregal Hall on the 24th day of June, just a day before the historic Shimla Conference had taken place here, exactly 77 years ago on the 25th day of June 1945!!

One may recall the Shimla Conference as a meeting between the Viceroy of India Lord Wavell and key political Indian leaders at the Viceregal Lodge, Shimla- the summer capital of British India; to craft a united independent India with an Interim government while its own constitution was being made. Indians would be given cabinet seats in proportion to the numerical strength of the total population of each group but the Conference was not fruitful! Brimming with excitement I stepped into the thick fog of the car-park with the silhouette of the beautiful-architecture-Viceregal-Lodge in the near distance. My mind raced back to the 25th of June 1945 when the national leaders arrived here with abundant optimism of formation of an Indian Government.

As one steps on the historic stone stairs of the narrow entrance of the 19th century Viceregal Lodge now the Indian Institute of Advanced Study one cannot help but nostalgically remember the national leaders who met here. I stood on the top of the staircase to step into the time machine to go back to the year 1945 when the first Shimla conference was happening here; to see the stalwart participants of Swarajya walking up the gravel path– Mahatma Gandhi, Jawahar Lal Nehru, Maulana Azad, Frontier Gandhi- Afghan Abdul Gaffar Khan, Sardar Patel, Dr Rajendra Prasad, C Rajagopalachari, GB Pant, Madan Mohan Malviya, Jinnah and many more! Next we walked into the regal interiors of the Viceregal lodge whose magnificence and vastness takes one’s breath away- the glass atrium roof, the superb wooden panelling on each and every inch of the walls meeting the end to end magenta carpet interspersed with splendidly polished and maintained furniture that is over 100 years old. We were told that the elegance of Viceregal Lodge was several times more in the yonder years! Browsing the regal interiors of the Halls & Galleries of the magnificent Viceregal Lodge today – now the Indian Institute of Advanced Study; connecting yesterday with today, one can feel national pride viewing the black & white photographs of the leaders & events that led to the birth of an Independent India and later a Republic on 26th January! It was exciting to spot the photo of Nehru and Maulana Azad standing at the same Porch that is still in use and we had entered through.

There were photographs of Gandhi surrounded by huge crowd, one with Rajkumari Amrit Kaur whose Manorville-residence he chose to stay during the Shimla conference. As we moved from one hall to the other, I thought of what a contrast it would have been to watch the simple white khadi clad leaders walking in and out of the opulence of the palace-like Viceregal Hall with the distant dream of a Free India as their only thought. The Shimla conference was held in an attractive long Hall with white table and chairs alongwith Buffet Lunches every day – one for Hindus and one for Muslims! Passing a shining piano with keys made of the valuable elephant Tusk we reached the last hall and came across photos of several national leaders as well as tens of Swatantra-Senanis– the young freedom fighters who accompanied the ‘senior idolised leaders’. To our great surprise we came across 3 photographs of my father-in-law Romesh Chandraji- founder editor of Punjab Kesari, Jagbani & Hind Samachar group of newspapers. We recalled that as the winds of the call for Gandhi’s August Kranti- Quit India movement reached faraway Lahore, young Romesh-Chandra joined the movement and at just at the age of 19 he travelled all the way to Shimla to be part of the Shimla conference! Two photographs of Romeshji were with his icon learned Maulana Azad (to be the education minister of India later). I recalled reading that Maulana Azad had chosen to stay at the Viceregal Lodge during the Shimla conference as closer look at the second the photograph revealed too.  The 3rd photograph was taken outside, on the gravel driveway of the Viceregal lodge as Dr Rajendra Prasadji (would be President of India) was seen leaving in a rickshaw. The First Draft of Partition

In the last Hall, additionally noticeable is a small round Table and 4 chairs which were of much historic significance – used by Nehru and last Viceroy Lord Mountbatten to  discuss the first draft of India’s partition!! I recalled reading about a dinner with Nehru when Lord Mountbatten showed him a ‘plan sent from England’ to which Nehru reacted with great anger and anguish as the plan was totally unacceptable!! Could it have been at this very table in the early-summer of 1947, I wondered?

….Not just Books, Galleries and Documentaries

On this Republic day -26th January, one anticipates that the present generations value the immense sacrifices of people and leaders of the bygone era and each of us works towards nation building at our level for they are not to be only remembered by viewing galleries, statues, history books and documentaries but their lives are an inspiration too!

Viceregal Lodge that was

It may have been the summer of the mid-19th century when Viceroy -Lord Lytton chose to build his residence at the Observatory Hill in Shimla enveloped in emerald green beauty and named after the Observatory house that already existed at there for meteorological recordings built by Captain Boileau in 1840.

After the ‘hot air balloon successful rising superstitious ceremony’ Lord Lytton ordered construction but little did he know that the magnificent castle like Viceregal lodge would become a home to Viceroy Lord Dufferin and his wife finally in 1880 and not him! In the next century Viceroy Lord Wavell took office in October 1943 and initiated the Free Nation talks but could not stop the partition of the Indian sub-continent!!