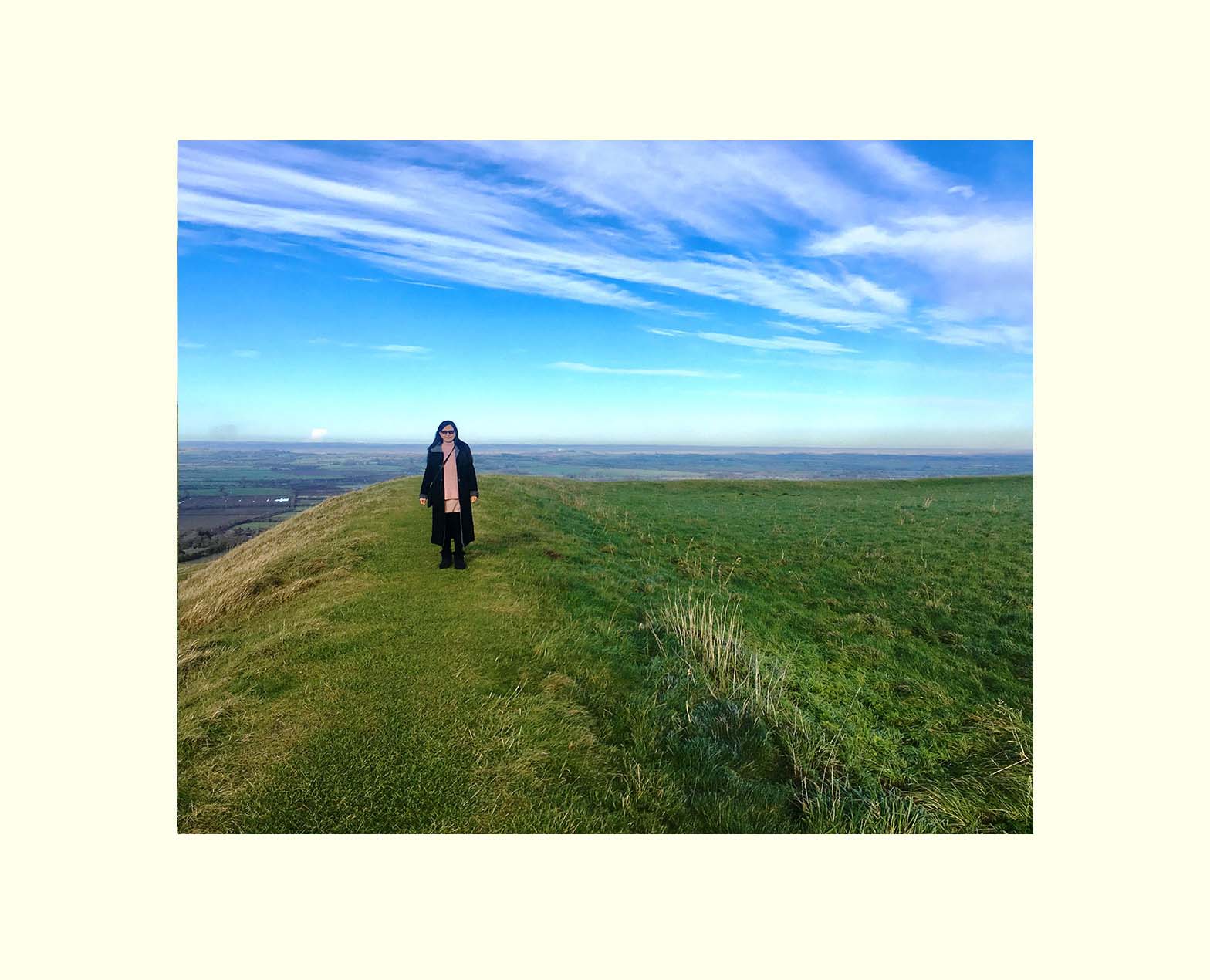 On a cold sunny December day discarding the comfort of the heated room we headed for the mysterious unfathomable White Horse Hill – a marvel amongst British destinations named so because of a prehistoric chalk White Horse etched on the sheer slope of a hill, humanly unattainable!! Ascending the gradual slope of acres of lush green grass we caught panoramic unending vistas around us. It was thrilling to recall that we ‘walked a well walked path’ since the Neolithic age through the Bronze Age to the Iron Age!

Once Upon a Time-Uffington Castle

Reaching the top of the hill we came upon a Blue board announcing the once existent Uffington Castle – an Iron Age Hill fort. Spread over an area of 7acres Uffington Castle is a significant feature on the way to the White Horse Hill, with only its single Bank and Ditch intact. Many photographs later we sauntered ahead, clueless to the direction of the White Horse when we met a Lady walking her dog who pointed to the horizon on our left where the hill met the deep blue sky! Gathering fascinating local folklore from her, regarding the horse, we proceeded downwards the edge of the hill. I recalled that recent evidence by Oxford University suggested the chalk White-Horse to be about 3000 years old whose art form is comparable to that of the ancient Celt tribe. (a tribe that inhabited Britain in the pre Roman period). Similar Horses have been depicted on the coins of the Celt tribe. Even if the tribes had created the White-Horse as their status symbol how could they have done it on the sheer slope of  the hill as the White Horse is cut into the hill at least 3 feet deep and filled with chalk, not just scratched with chalk or had they found the chalk below while digging!!

The Legends of the White Horse

A short walk later we excitedly spotted parts of the chalk outline of the White-Horse and approached it from its ‘face side’. The 374 feet long image of the horse could be seen only in fractions and pieces as it was on a slope and a complete image can be aerial or from a nearby village! The  ecstasy felt at the foremost sight shall go down the memory lane and linger ceaselessly in our minds forever- the White Horse lay in front of us with miles of luxuriant greenery sloping down to the valley far below, engulfed in the hug of the profound blue sky!

I seemed to go back in time to contemplate the true legend attached to the White Horse. Legend has it that once a year the Horse leaves its position and descends the valley below using the Giant-Steps, to the Manger below! I wondered if it was the grazing ground for the horses of their protector Goddess Epona from the Celt folklore, was it a tribal symbol allied to the inhabitants of the Uffington Castle, was it a Sabre and not a Horse?

A quick peek into our map, that we had printed earlier, showed the steep side valley below as the Manger where according to mythology, horses grazed centuries back at night! Then there were the naturally formed ‘Giant Steps’ on the valley that are remains of the Early or Medieval Terrace Farming. No wonder White Horse Hill is a Site of Special Scientific interest. One theory that particularly interested me was that of it being a ‘Solar Horse’ – the one attached to the mythology that Sun was carried across the sky on a Horse Chariot, so similar to the legend of Surya dev and his chariot of horses linked to our culture!! According to the theory the horse is aligned to the Sun in a way that the Sun appears to be ahead of the Horse, especially in the mid winters. We had earlier being informed by the Lady with the dog that the Horse outline appears so white as there is an age old tradition of scouring it by the nearby villagers and now a Chalking-day is fixed and they gather with buckets of chalk, hammers and kneepads to remove the grass carefully and break the previous hardened chalk to replace with fresh white chalk; keeping it visible for centuries to come.  During the World War II it was covered with turf to escape being bombed by enemy aircrafts.

Faraway in the dipping valley below us we spotted the fabled Dragon Hill- a small green circular 10meter high hill with a flat top that we had passed earlier while driving towards the car-park. It is a natural chalk hill associated with the fable of the patron saint of England -Saint George slaying the fire-breathing Dragon! The hillock has small steps cut into it to reach the top that holds a bare chalk patch where no grass ever grows as it is believed to be the spot where the Dragon’s blood spilled when Saint George killed it. The flat top of the Dragon Hillon the left below

The other theory is that it could be a ritual site for the Iron Age people or Celts, as the top of the hill was artificially flattened by them to sit and perform a ritual by fire- lighting. Scientists theorise that the Dragon’s Hill was formed by the melting waters of the Ice Age!

Bidding farewell to the intriguing White Horse we walked on towards the distant car park turning back several times to catch the last few glimpses of the unexplainable White Horse. This was a different route than the one we came by earlier. We soon reached the next destination indicated our map- the historic, sole Thorn tree with acres of only grassland around. I could visualise the two mighty armies gathered around this sole Thorn tree in the end of the 800’s AD for the fierce Battle of Ashdown- English monarch King Alfred the Great against the invading Danes who got pushed back!

Mound of the Dead

Walking away from the Tree we tried to look at the White Horse again behind us and perhaps stepped on a Neolithic Burial Mound which had no signage except being marked on the map. It was fascinating to discover a 6000 year old cemetery where excavations have revealed skeletons with coins in their mouth. The tradition was followed from a belief that the dead had to pay a coin to cross the ‘river to the next life.’ I thought that it was so similar to Indian belief of ‘crossing a river’ after death!

White Horse in Music, Literature and as Emblems

I recalled reading that the White Horse is being used as an Emblem by a Council, School and College besides others. It finds place in English novels since the year 1859, epic poems, BBC Television serials music albums and songs as well.

We met no other visitors except those two people exercising their dogs. Come summer and the hills would be alive with visitors, children, kite- flyers, paragliders, birds watchers, trekkers- their number touching 200,000 per year, all in the hope of unveiling the unfathomable White Horse Hill! 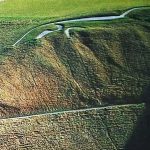 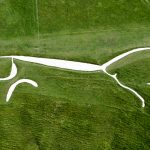 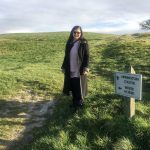 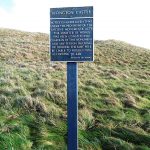 The Uffington Castle lost in the past 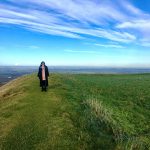 On the Boundary Wall of the once existent Uffington Castle 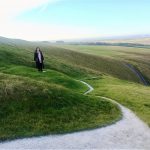 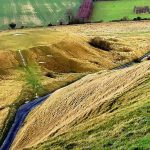 The flat top of the Dragon Hillon the left below 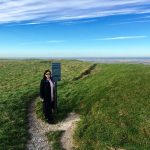 Writer at the Iron Age hill fort that once existed here 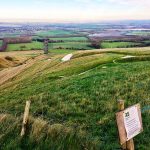