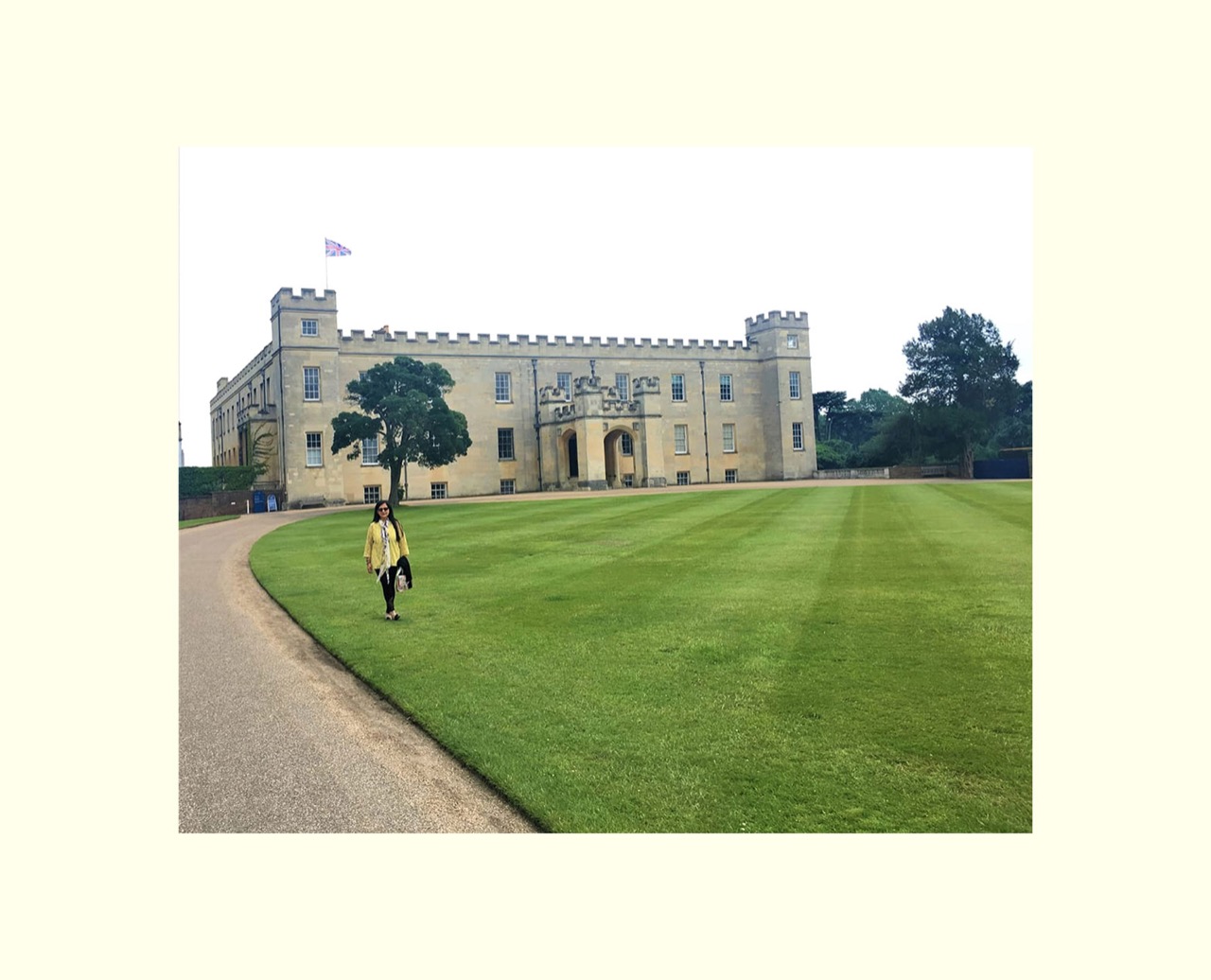 Majestic Syon Park House came into view across an expanse of emerald green lawn with a backdrop of sapphire blue sky- an awe inspiring sight!  400 years ago from the monastic remains of the 15th century Syon Abbey a royal palace of the Tudor era ascended that remains home to the Duke and Duchess of Northumberland. Additionally, New Stone Age, Bronze Age and Iron Age excavations have been discovered around Syon Park house. All these reasons were enough to rouse our interest to visit the Syon Park House in Brentford England! We walked towards Syon Park house set in 200 acres of parkland and redone in the early 19th century by celebrated interior designer Robert Adams. I stepped into the Time machine to go back to the Syon Park of prehistoric times situated, in some form, on the banks of River Thames –a route of communication over the Ages!!

Down the time-pipeline; in the year 1415 a Saint Bridget-Order first, mystical, academic Bridgettine Abbey of England and a pilgrimage site existed in Syon. On our right was the front lawn of Syon where the pilgrims gathered for mass and listening to sermons by the priests! After the forced Dissolution of Monasteries by Henry VIII it became Tudor Crown property in 1539, the Duke of Somerset- acquired it and build the grand house on it by demolishing the Abbey, mostly as we see it today! After a history of danger and deceit it was reacquired by the crown by 1558. An inventory of 1593 describes it as a colossal Tudor house large enough to accommodate Queen Elizabeth and her court!!

From the second half of 16th century  the dynamic historic Percy family- the Earls of Northumberland came to possess Syon but it passed on to the Seymour family through marriage of their daughter Elizabeth Percy to Charles Seymour- 6th Duke of Somerset.  12th Duke and Duchess of Northumberland are the proud owners of the glorious Syon Park house and the title as well!

We embarked on the tour of the Syon Park House and saw it as redesigned and restored in 1762 as a palatial home in Italian-Renaissance-style and not as ‘what was where’ during the Abbey times, Tudor or early Percy-Seymour era!! We were welcomed into the Syon House by friendly staff and we looked around at the soothing pastel shades of the Great Hall that was the colour scheme of the original Robert Adam design and extremely well- maintained. Soothing pastels of the Great hall with a contrast floor

From the pastels of the Great Hall to the magnificence of gold plaster, gilded statues, 12 veneered-marble-look pillars to the vibrant coloured geometrical floor design of the Ante-room; was quite a contrast! We were informed that the room was inspired by the palatial villas of Rome which was a trend then! The Wedgewood plaque above, on the ceiling was a replica in plaster of an antique- relief now in world famous French Louvre museum! I found myself in year 1832 when Ante Room was a Dining room when King William IV was invited for dinner here!! The lavish Ante room from the late 18th century

The 20 meter long white and gold Dining room was spectacular with gilded wall mirrors on intricate patterns, and clever use of Corinthian Pillars to highlight the splendour. Imperial Rome seemed to have been revoked in this room through the display of valuable Robert-Adam’s Fireplace with a marble panel on the top, statues, large gilded candle-stands maybe from the Dining table! We were impressed to know that no damask fabric or tapestries were used so that they might not retain the smell of food.

The grandeur of the Red Drawing room

The grandeur of the Drawing room took our breath away as the Red Drawing room is one of the most stunning rooms that I have witnessed. Again its red colour and interiors were a contrast to the pristine white and gold of the previous Stateroom- the Dining room. The coved ceiling is extraordinarily designed with 239 small medallions, each carrying an exquisite mythological character inspired by a year 1530’s palace like Roman Villa! The Greek honeysuckle pattern on the carpet matches with the ceiling medallions! White marble fireplace, finest Venetian mirrors and priceless paintings of Royals in elaborate expensive gowns, furniture particularly mosaic tables – all are examples of superb craftsmanship! We entered the 41.4 meter Long-Gallery from the Red Drawing room where a Volunteer pointed that the magnificent gallery was an echo of designing virtuoso of Robert Adams who created five bays, 3 doors, two fireplaces, numerous bookshelves along the gallery to hold up to 3000 books! She pointed out a Bookcase that is a false door and leads to the lawn outside! All this and more was added to an original Tudor era panelled Gallery to create an awesome room for ladies in particular! In my time machine, I was back in the 18th century to watch ladies pouring in from the Red Drawing to the east front of the Syon Park house along whose length ran this Gallery!! They sophisticatedly walked over the year1765 carpet, some towards either of the marvellous Turret rooms at both ends of the Gallery bedecked with silk, mirrors and an exquisite mechanical Singing bird with a timepiece!! Print room with a history

Next we were in a room full of lively portraits of ‘those who formed the history of Syon Park’ – the Tudor history, the Seymours and the Percys of Northumberland. The volunteer lady added that before 1824, it originally was bedecked with one hundred Prints bought by the 1st Duchess of Northumberland from her European Continent travelling so the name- Print room! Visitors at Print room that displays ‘History of Syon Park’

We entered the spectacular Green Drawing room designed by Robert Adams with a marvellous Fireplace above which is the portrait of King Edward VI as an infant, 18th century Beech wood furniture, micro mosaic giltwood side tables, 1830’s crystal chandelier adorned the Italian golden ceiling similar to the Print room and Dining room.

What a pleasure it must have been to dine in this beautiful large Dining room with a mahogany extendable table displayed with French gilded porcelain. The beauty of the Italian ceiling analogous to the other staterooms was enhanced by the acme attraction of the room- the outstanding gilt-brass Waterfall chandelier from 1825 designed with crystal Fountains and Dolphins! The end to end red woven carpet and the gold framed portraits completed the magical effect!

Before we went upstairs  we came across the a expensive beautiful tall Sevres Vase depicting mythology- a piece of art; displayed on a green marble- pedestal, presented by  French King Charles X to the  3rd Duke who attended his coronation in 1825!

Upstairs in the North front of the House, we came across bedrooms used by the Duke’s- family for their yearly visits to Syon Park around spring-summer season, furnished in the 1900’s-style with adjoining dressing rooms. Soon we were in the East front and were eager to see the main suite of State bedrooms that were exceptional as young Princess Victoria and her mother- Duchess of Kent often stayed here!! We continued on our visit to the historic 200 acres of parkland that includes the amazing Great Conservatory alongwith unveiling the secrets of the mystic medieval Syon Abbey and intrigues of its demolition at the exhibition in the Undercroft of the Syon House. 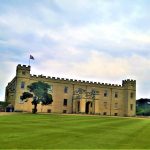 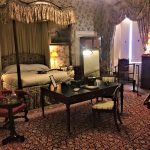 A Bedroom on the Upper floor where the present duke and his family live ; in the Nursery passage 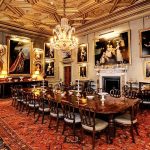 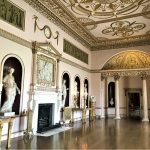 Stateroom from 1763- the Gold and white Dining room, now rented for weddings and events 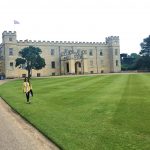 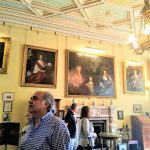 Visitors at Print room that displays’History of Syon Park’ 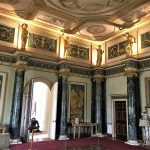 The lavish Ante room from the late 18th century 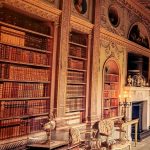 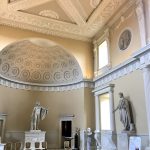 soothing pastels of the Great hall with a contrast floor 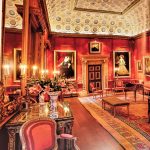