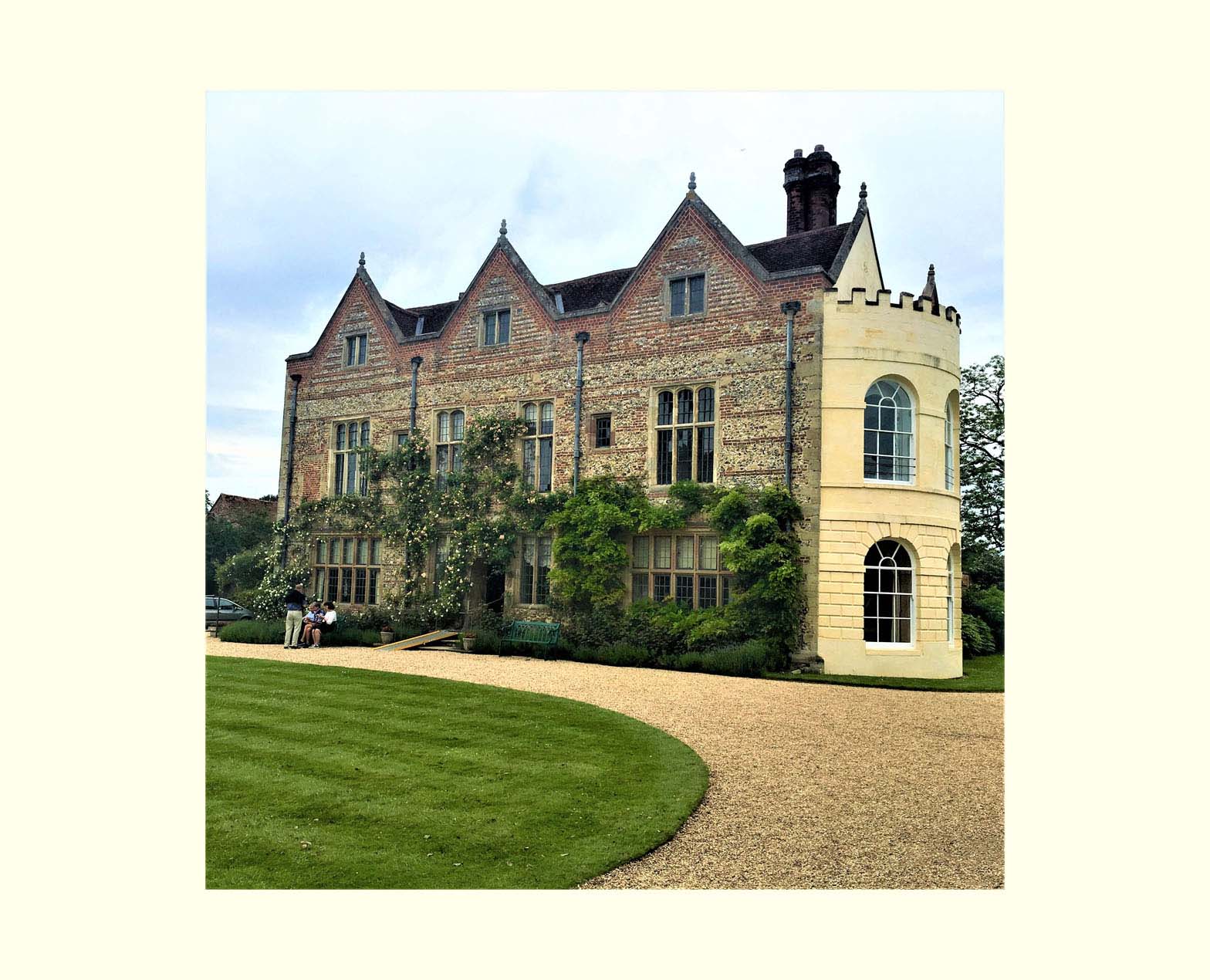 Greys Court – the Gardens of Discovery Writer at medieval Oval garden outside Greys Court walking towards the spectacular series of gardens ahead!

In its vicinity was, at one point of time, a Castle, maybe a thousand years ago! Crunching ahead on the gravel path we caught the first view of the three storey brick and stone edifice, developed from an Elizabethan house from late 16thcentury! A memory jog into the past brought up the names of the powerful and wealthy De Grey family who lived here first and the place takes their name – Greys Court, as we call it today. After finishing the tour of the elegant home we decided to explore the gardens and parklands around. I would remind my readers of a previous Blog related to the Greys-Court interiors remarkable visit and now this part being a stimulating addition to my prior Blog.

Historical Milieu- a Brush up

Stepping outside the Greys Court house entrance we walked along the Oval lawn headed for the faraway 11th century walls and Great Tower ruins facing us. On the way I recalled the antiquity of the Greys Court that was the family home of the De-Greys till the 15th century, next granted by the King to the Knollys-family and almost two centuries later, Greys Court had wealthy Baronets-Stapletons as its new owners. In 1934, the house was sold to the mother of writer Ian-Fleming of the James Bond fame! Three years later, the happy Brunner family took over the ownership of the House.

We gathered that Sir John Brunner formed the Brunner- Mond Company in 1873, the wealthiest British chemical company that went on to be the famous ICI –Imperial Chemicals Company that manufactures the Dulux paints besides much more!

We felt national pride to remember the present name of Brunner-Mond Company (since 2011) is Tata Chemicals Europe– part of the India based Tata group!

The Gardens of Discovery

I recalled reading that since centuries there was picturesque parkland around the house and a garden; which was additionally proven by the 18th century Water colour-paintings we had noticed during the Greys-Court House tour, earlier. We had recently caught the quaint view of the present extensive gardens through the windows of the Greys Court house and once outside the house we enthusiastically walked along the side of the Oval lawn. The Oval Lawn has foundations of Walls and two Gate-houses dating from mid-14th century! Keeping their preservation in mind we kept to the gravel paths around and did not step on the lawn. The multiple Gardens that we were strolling to, were an addition by the Brunner family who creatively included the Cromwellian-stables, Great Tower & its medieval wall in landscaping with a series of gardens with doors, garden furniture and planted more trees to create this delightful area drenched in greens!

The Tower Garden and More

We entered the Tower Garden named so, as it lay quietly in the shadow of Greys Court’s historic towers, part of the Castle that once existed there! We passed through a narrow wrought-iron gate and were surprised to see the large flowers-filled garden inside! This is Lady Brunner’s White Garden that she lay in 1938 by choosing a scheme of white flowering plants which rendered it a serene ambience. Fashion trends of 1930’s indicate that white was a fashionable colour then!

The Ancient-wall behind us was constructed by the De Greys who lived here since the 11th century. Our map mentioned that a 18th century list does indicate a garden surrounded by a parkland in the Greys Court area but clear substantiation of a garden is available only after the Brunners moved in by 1937. Past a Lily filled pond and white garden furniture we next moved into the Rose Garden- the ‘tranquil haven’ created by Mrs Brunner in 1937 with theatrical concept of ‘rooms, iron-doors and doors’ inside the walled garden! The fragrance of beautiful June-roses wafted in the air as we read about the wall of the Rose garden that collapsed in 2017 and was restored by the National Trust, using the original historic bricks and material with the help of traditional techniques!

Up ahead is the riot of purple and green- vines of innumerable tiny bunches of light purple flowers that we spotted in the distance over the Iron gate; laid way back in the year 1839-the spectacular Wisteria Walk! Spectacular purple and green Vines of Wisteria- Walk laid in 1839 !

Soon we reached the medieval Kitchen Garden to discover the Hazelnut Walk from the year 1776 beside its eastern wall along with fruit trees and vegetables. Across the vast Kitchen-Garden we headed for the brick and grass Maze inspired by Archbishop of Canterbury’s speech-words ‘the maze-like muddle in which the world finds itself’. Curiously we tried to unravel the interesting meaning of the Christian symbolism while getting entertained on the labyrinth! We took a long walk back to Lady-Brunner’s ornamental Cherry garden that held an 18th century Swiss Fountain – a 40thwedding anniversary gift to the Brunners from their children! On the other side is the Knot Garden behind the wall of the Cromwellian stables used by soldiers during England’s Civil war around the year1578, built as lodgings initially! Finally we were back at the Oval lawn and decided to explore the Orchard, Chinese Moon Bridge, Ice house and much more; each bearing a story of their own, on another Parkland Walks visit; next time we were here! We followed the Tearooms sign path on the other side of Greys Court house and headed for tea. The Donkey’s Wheel and Cowshed tearoom

We passed the medieval 200 feet deep Donkey’s Wheel on the way to the Tearoom. It had been used since the year 1586 to draw water and is a rare example of its mechanism that is surviving to this day! Its water was raised by a tread-wheel turned by a donkey! Soon after, while enjoying the tea I noticed a ‘writing’ on one of the Tearoom walls which read that it was the Cowshed of the yesteryears which housed Sir Felix’s and Lady Brunner’s prize winning herd of Guernsey cattle! Donkey’s wheel since 1586 -for drawing water from the Well!

There was this familiar look to the Greys Court though it was our first visit here so I questioned a staff regarding filming here, if any. She confirmed that Greys Court was part of the globally sensational television serial Downton Abbey .In Series 3 it is shown as the Crawley- family’s Hunting Lodge where Lord Grantham contemplates moving if Downton Abbey is lost to a bad investment. Then it was part of detective novelist Agatha Christie’s ITV series as well as Midsomer-Murders series, besides many more!

After browsing and shopping at the plants and flowers Nursery and Souvenir shop selling local special-ware and Books we headed for the car park.

While heading back to London the appropriateness of Lady Brunner’s message reverberated in my mind that she hoped that ‘Greys Court would continue to attract archaeologists and gardeners along with families as a haven of peace and quietness away from pressures of present day living!’ And it was truly so what she envisioned years ago!