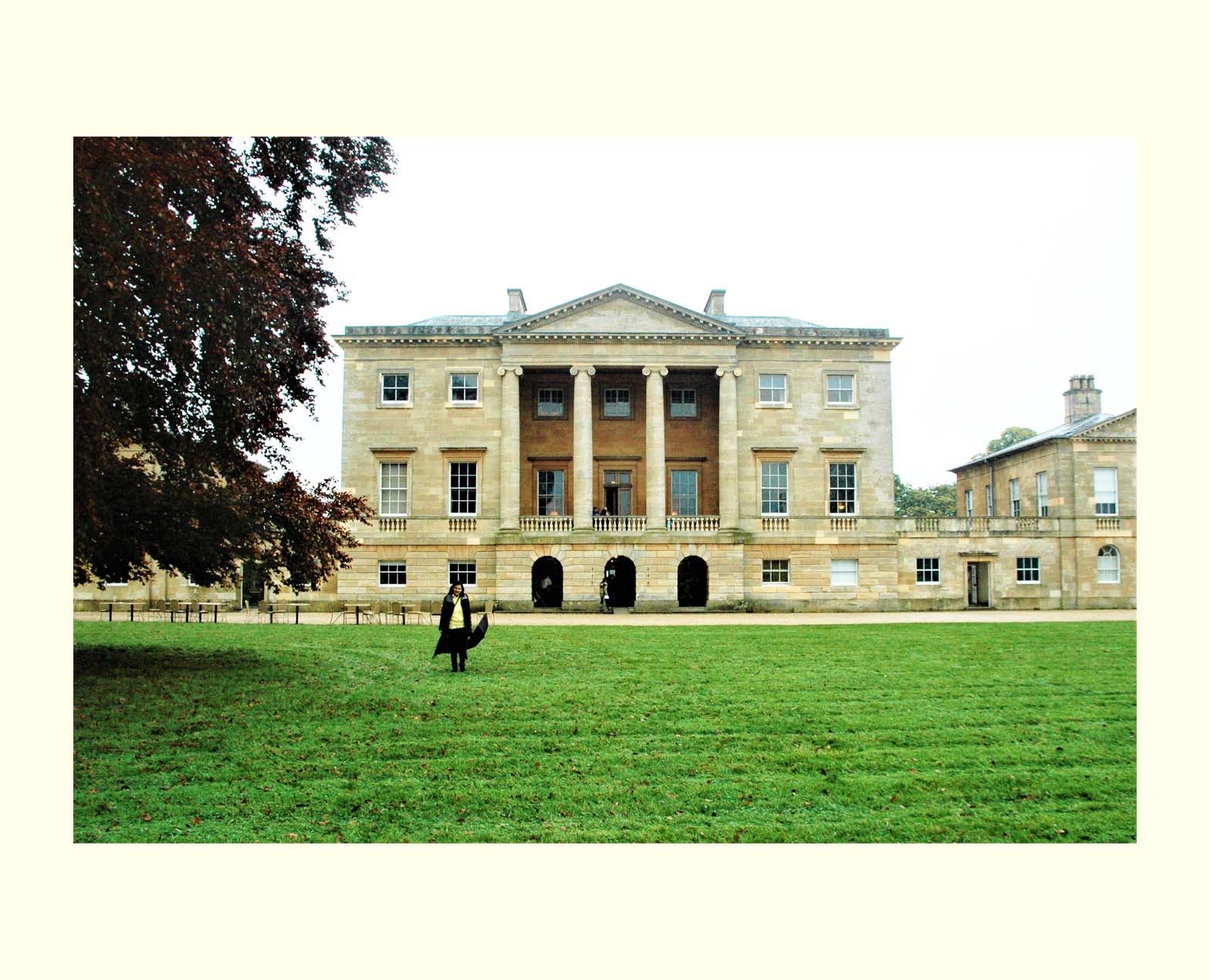 After a long walk from the car park through lush emerald greenery we came upon the honey- hued Bathstone stunning façade of the Basildon Park House in Reading England, set within 400 acres of splendid woodland. We set out to explore its journey from an 18th century home to a deserted home to a fashionably restored home in the1950’s.  Though today we were here for an additional reason. Basildon Park had been one of the filming locations of the globally sensational Television serial – Downton Abbey. Basildon Park was projected as the Grantham house of the Crawley family in London for the interior as well as lush parklands and gardens scenes where the family enjoys the summer social revelry.

Visitor at the Basildon Park House on a rainy day!

A short while ago, enjoying the woodland-walk towards the house my thoughts reverted to the historical records of Basildon Park  being first documented way back in the year 1311 and next a Manor being built in the 17th century. A century later Francis Sykes of the East India Company made his way home from India with considerable amount of ill-gotten fortunes and decided to build a grand villa like the other wealthy ‘English Nobabs” who had returned from Hindustan; furthermore this Berkshire area was nicknamed –English Hindoostan!

Investigations into his dubious transactions in India led him to sell it in 1838 to liberal MP James Morrison. This was the beginning of the ‘golden period’ of Basildon that lasted till 1910 after which the House remained empty for 40 years! Finally Basildon Park house was saved by the newspaper tycoons – 2nd Lord and Lady Iliffe when they bought it in 1952 and painstakingly restored it. The lone Beech tree amongst hundreds of trees dotting the Parklands

Though Basildon Park House had been surrounded by parks and woodland several trees and shrubs were planted by other previous owners- Viscount Fane and some by landscape-designer Lancelot Brown in 1778 whose rectangular walled Kitchen-garden with a Heating system way back in the 1700’s needs special mention! Records indicate addition of formal gardens in the mid-19th century. Soon the Woods cleared into acres of partially open Parkland and the three storey high west façade of the glorious Basildon House came into view with a pediment portico supported by colossal columns. For years to come we remembered the upper floor Entrance of the grand Basildon house that held magnificent views of the acres of greenery and had then made a mental note of exploring it next! After concluding the tour we decided to discover the emerald beauty of the Parks and Gardens stretched around us overlooking the Thames Valley.

We had a map that clearly marked the four main Walks of Basildon Park house for which it was famous- a half mile long Walk to a 3 miles long Walk whose time varied between 20 minutes to 2 hours set inside the 400 acres of greenery!! We also had a print-out of the insects, birds and flowers to be spotted along the way during Spring, Summer, Autumn and Winter. We were so impressed but opted to explore the parks and gardens closer to the Basildon Park House- the Garden Terrace at the back and the front spread of lawns where the film shootings happened. Strolling along a bed of Lavender flowers we proceeded to the Garden-Terrace at the back of Basildon Park House which is actually the East-front of the imposing House and is covered with a green carpet like lawn. Facing Basildon we noticed the special octagonal Garden-room that opens into the vast gardens and I imagined its owners stepping here on the Garden-Terrace after breakfast to catch the panoramic view of the parkland with historic trees and sometimes cattle grazing in the distance; since the year 1775 when it was used as a Breakfast room! I recalled seeing the L’Hindoustansceneries-collection upon the Wallpaper of the Garden-room by a French artist who had never been to India but used another artist’s collection to design this wallpaper!! Flowers were beginning to erupt; forming a contrast with the green grass. The door top of the Breakfast room was barely visible from this lower terrace and we almost faced the first floor Octagon room on its top!! Absorbing the spectacular views of the parkland and gardens, we headed for the Basildon House Tea room. Besides the traditional English Cream- Tea, seasonal fresh food was available too. Its walls displayed a collection of black and white sketches of 12 ‘Nobab style Indian Homes’ around here in England because these grand Houses resemble homes of Nawabs in India! We chatted with a friendly server who gushed with pride that lots of the cast of Downton Abbey serial have said how beautiful Basildon Park is. She added that it was ‘lovely to see the cast and actors of the serial taking photos of the view, or sitting under the shade of a tree between takes, enjoying the serenity!’ Some picnic scenes of the serial Downton Abbey were also filmed in this Parkland dotted with Beech, Chestnut and Lime trees and the Cast liked Basildon-Park a lot. Later we sat relaxing on the similar garden-chairs as the crew; imagining the roller-coaster journey of Basildon-Park from the early days of the East India Company to the filming of globally sensational TV serial Downton Abbey!

As we relaxed on the green Reclining-garden-chairs we discussed the scenes that were filmed here at Basildon. We felt that we were visiting the London residence of Crawley family -Grantham House!  Both, interiors and exteriors of Basildon Park House had been filmed for various scenes of the serial Downton Abbey.

A volunteer had told us earlier that a picnic scene in the London season of Downton Abbey was filmed here too in which a picnic is thrown by Harold in Kensington Gardens with Albert Memorial as the background. The Memorial in this scene was superimposed and was actually filmed in the grounds of Basildon Park!!

Picnic baskets walk past us, some headed for the one of the 4 Basildon- Park Walks directions to select their own venue! An exciting idea for our next visit.

Driving back home we mused on the acres of lush parkland and gardens set amidst spectacular views of the river Thames valley and the majestic Basildon Park House in ‘English Hindoostan” area of the yonder-years! 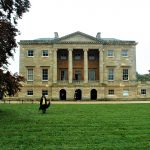 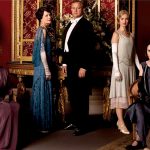 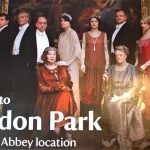 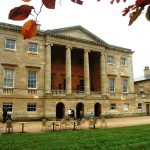 The front lawn of the Basildon park House 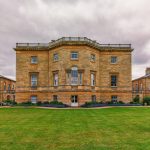 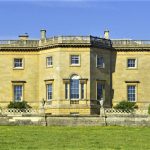 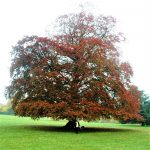 The lone Beech tree amongst hundreds of trees dotting the Parklands 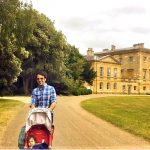 Long walk in the woodland with Basildon Park House in the background, ideal for prams! 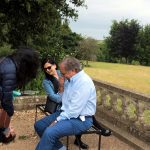 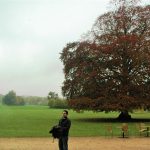 Visitor at the Basildon Park House on a rainy day! 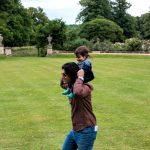