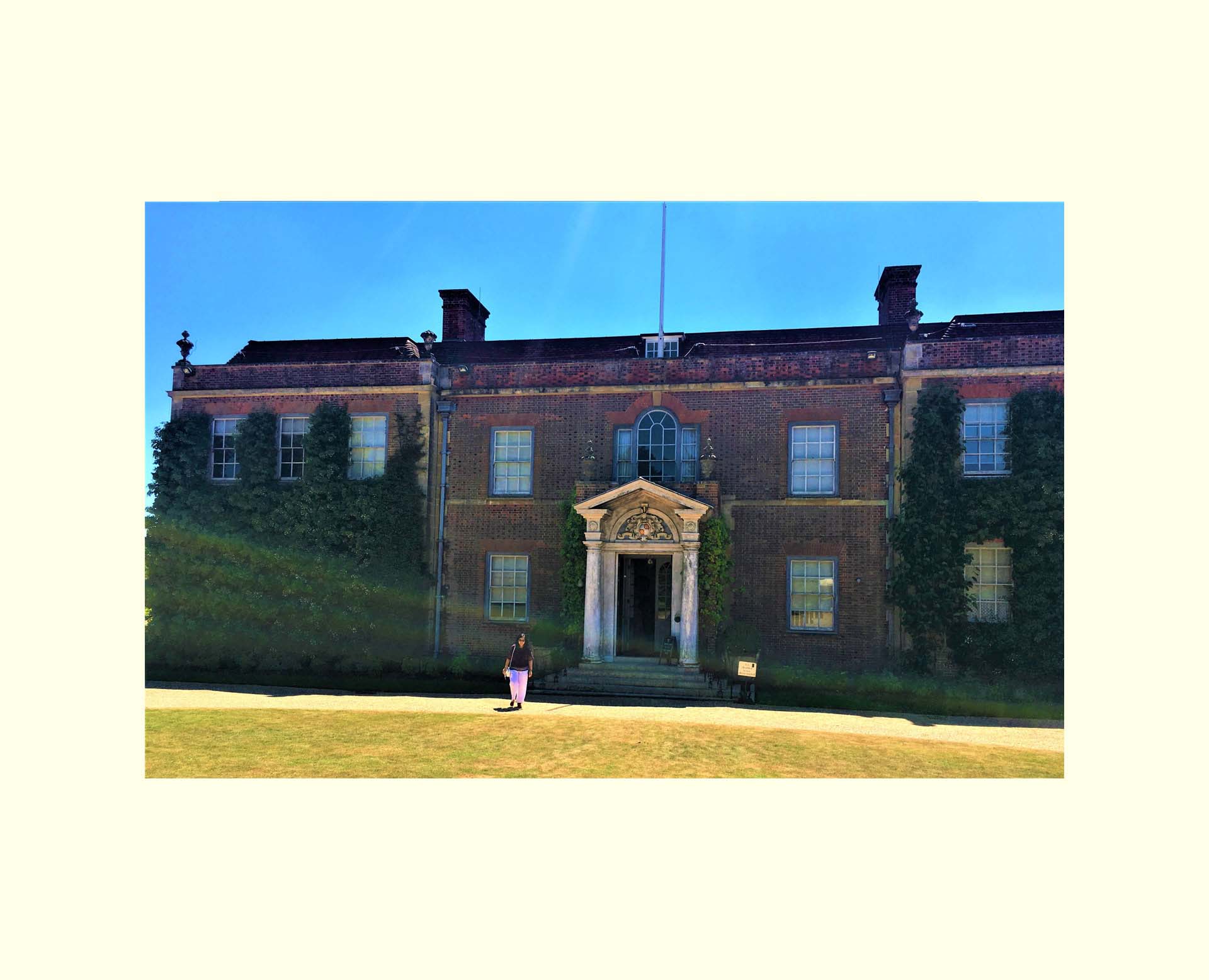 The House on the Hill – Hinton Ampner

In the last 400 years rising from the ashes twice; back to its glory yet again and being haunted for over a century ; the unique name Hinton Ampner– the ‘House on the Hill’ had enough reasons for us to explore it! Driving through the rolling green Hampshire countryside, we reached the historic 16th century Tudor country home and estate now set in modern Georgian grandeur, rebuilt twice after getting burnt down during the past centuries! We were here to enjoy the harmony and serenity of the Hinton-Ampner house – a combination of traditional interiors alongwith well-designed gardens and parklands. Walk to the Hinton Ampner- what’s in a name?

While walking towards the house I recalled reading about the unusual name of the house that in Old English, Heah means a High Place and Tun is an enclosure that could be a farm or estate. The addition of Ampner depicts that this place was held by an Almoner- who was an official distributor of alms from Winchester. So the Domesday Book of the 11th century refers to it as Hentune which changed to Henton by the 12th century and then to Hinton- Amner in the subsequent century! Thus, the name too holds an inimitable history of its own. A bend in the Drive revealed the first sight of the neo-Georgian Manor house- the Hinton-Ampner. The unassuming simple stately brickwork exterior offered no hint to what surprises the magnificent interior held for us!

A Peep into the Past

What we saw in front of us was the 1960’s recreation of ‘the second time, raised from the ashes’ Hinton-Ampner house of Lord Sherborne – Ralph Dutton. His ancestors the Stewkeleys lived here since 1597 in an E – shaped House that acquired the reputation of a haunted house in the 18th century so much so the house lay deserted for years and later Ralph Dutton’s grandfather redesigned a Victorian house here. We entered the well-lit Entrance Hall of the Hinton-Ampner house with black-white marble flooring reflecting the aesthetic taste of its last owner Ralph Dutton. The room reflected the interest of the Lord Sherborne Ralph Dutton in Italian art and Stone- furniture which was quite outstanding in its decor. Many fittings and furniture displayed here were acquired from other equally important old Stately-houses! Next we went into the beautiful splendid yellow-cream and gold colour- combination Drawing room that lends a bright yet placid hue to the room- one of the main attractions of the Hinton- Ampner House. The Regency striped wallpaper, French Savonnerie carpet, Georgian gilt pieces, 18th century door-cases and marble chimney-pieces were all in a state of delightful balance. The volunteer pointed out a green granite circular table in the middle of the room that held the 3 -gold Griffins perfume–burner from 1770 that was an equivalent of an 18th century air freshener whose aroma drove away the after dinner vapours and smell! Past the pillars was the South Drawing room whose highlight was the 5.6 feet deep magnificent chandelier, which stood tall since centuries, it was a task to clean it then as well as now!

Library and the second fire

Next, we moved to another remarkable part of the house; the Library which holds quintessential stories of its own. As we stood in the Library I stepped onto the time machine to the year 1960 when a spark from the burning logs in the Fireplace set the nearby sofa on fire whilst Ralph Dutton was out taking a walk in the estate. This was the second major fire in Hinton –Ampner house! By the time he returned the fierce fire turned the book collection to ashes which he later restocked with those of fine English writers, poets and travel writers! Ralph himself was a writer and the Library was his preferred room for reading, reference and writing. Three of his popular books are – The English Country House (1935), The English Garden (1937) and The English Interior (1948). I recalled reading earlier that he used the part of the proceeds of the first book to buy a 100 pound gilt-wood table in the Drawing room!

We looked out for the panels in the marble fireplace that came from French Queen Marie Antoinette’s Palace near Paris and furniture pieces made from Indian Coromandel Coast wood & Sri Lankan wood as well. Additionally notable are the porphyry (hard purple rock with feldspar crystals) decorative ornamental pieces like vases and urns. The volunteer asked us to look out for the porphyry ornamental products in the rebuilt house, which were Dutton’s favourites.

Next we entered the Sitting room or the Study with red damask walls with exceptional 18th century paintings on it, all recreated after the 1960’s fire. Especially notable are painter Fuseli’s depiction of Shakespeare’s play ‘Winter’s Tale’ from the year 1623! We had noticed that it was in vogue in the 18th century to illustrate Shakespeare’s work as we had seen in the other State homes too. Most belongings from this room survived the fire as they were passed out through the large windows when the room burned! Whilst in the dining room our attention was drawn to the elaborate plasterwork ceiling and splendid gilt wood pier-glass, both designed by the famous 18th century architect and interior designer Robert Adams. The volunteer told us that both were rescued from old palatial-Houses being demolished and reinstated here! We were told that this normal size table had replaced Dutton’s small Dining table as he lived here alone. Many times in a year the China on the table is changed from Dutton’s lovable collection.

Upstairs bedrooms – of Ghosts and Today

We were quite excited to go upstairs as that used to be considered the haunted part of the Hinton-Ampner house in the 18thcentury. The stories of hauntings commenced when a Stewkelay family daughter married a Lord Stawel who came to live here. She was older than him and when she died he had an illicit relationship with her younger sister that bore a child and later the child mysteriously disappeared. There were rumours of bodies that lay buried here, people often heard sounds and saw figures, so much so that the house lay deserted for years!!

Today a simple main staircase led to a central passage connecting all bedrooms with ‘en suite’ bathrooms. Ralph Dutton’s large bedroom, well-lit with a big bay-window held the stunning panoramic view of the garden and the valley beyond.

Back on the ground floor of the Hinton-Ampner house we browsed through the glorious ceramic collection of Lord Sherbourne – Ralph Dutton, which had survived the fire! The volunteer explained the making of white bodied porcelain-ceramics, real gold-gilded ceramics, sturdier ivory-white Bone china, earthen ware and Biscuit-porcelain! For easy and quick understanding of visitors the entire collection was exhibited in six-lots including the legendary Sevres and Wedgewood ceramic pieces.

We exited the grand Hinton Ampner House to explore its beautiful 4 centuries old extensive gardens and estate spread over 1650 acres!!