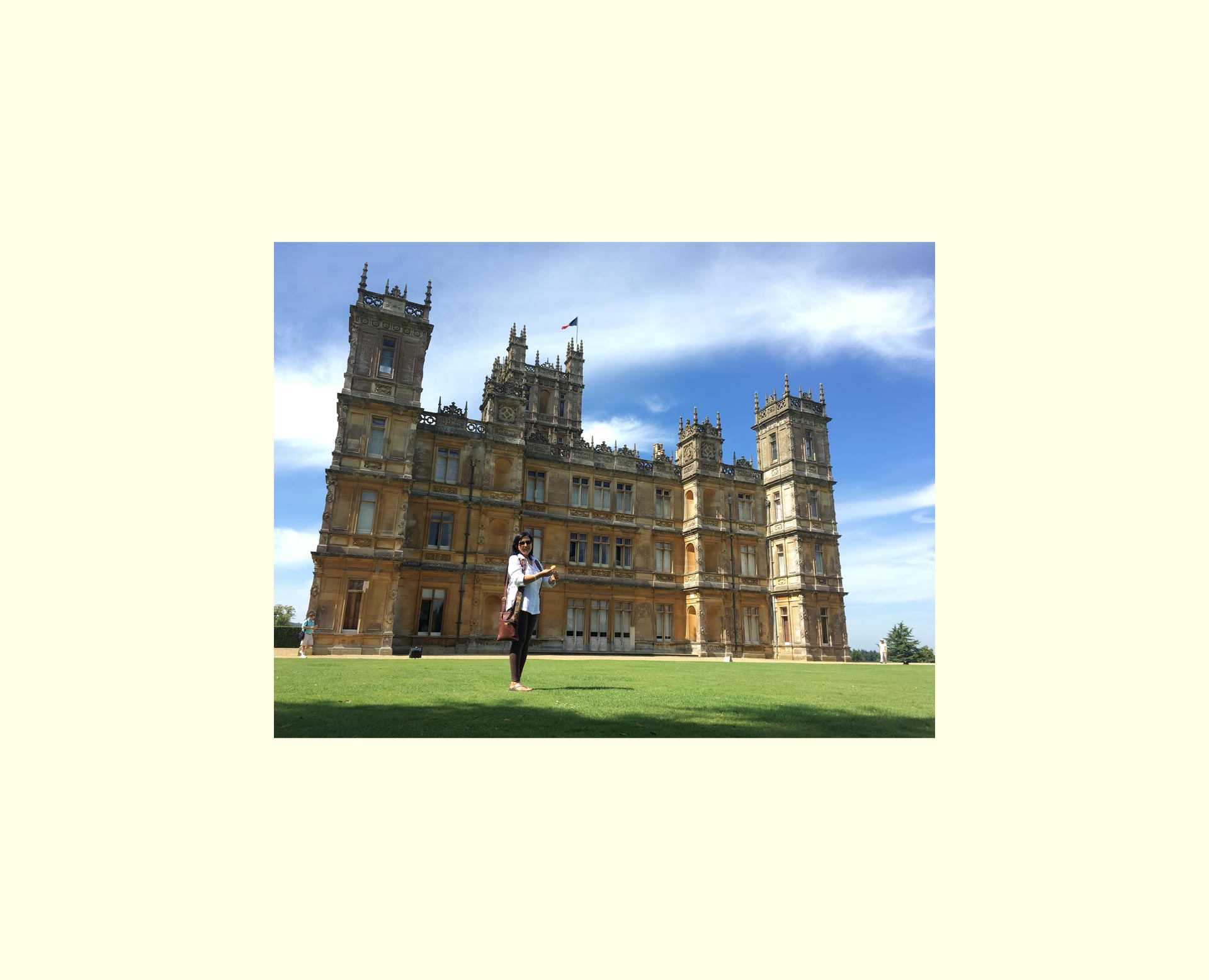 As the temperature touched 30 degrees and the sun blazed through the crystal clear sky we caught the first view of the Highclere Castle- one of England’s most beautiful Victorian-era Castles near London and Television serial’s Downton Abbey. Ever since over 100 countries aired the ‘global sensation’ Television serial Downton Abbey, I always anticipated fervently to see it for real since then! And there I was standing, right before it witnessing the magnificent State-home to the 8th Earl and Countess of Carnarvon and their children. We undertook this drive to the regal Highclere Castle not just to experience the setting for the period- drama but also to know more about the death of 5th Earl Lord Carnarvon and the ‘Curse of Pharoah Tutankhamun’!

From the car park we headed for the Highclere Castle renovated by Sir Charles Barry in 1842 – an Italianate-look House built from an original Elizabethan house that was in turn built on a site of a medieval 9th century palace of Bishops of Winchester! The palace was rebuilt as Highclere Place House in the year 1679 by Sir Robert Sawyer and the final look that we were about to see was created in the mid-19th century. Today its exterior is a pleasant reminder of the honey-hued stones of the Bath city and the Houses of Parliament made by the same architect. Recent archaeological finds around the Castle indicate two Forts, ancient Tracks and Fields of the Iron Age and Bronze Age! During the long walk my thoughts diverted to the turn of the 20th century setting of the classic soap–opera Downton Abbey that marked the sunset of the golden era of British Country Estates having marvelous size mansions that entail a village, tenants and an army of servants to sustain it. The absorbing script revolves around the effort to persist the prolific lifestyle of one such family of Lord and Lady Grantham- the Crawleys. In fact the writer of ‘Downton Abbey’ Julian Fellowes wrote the script with Highclere castle in mind and his friendship with the Carnarvon family helped him turn his reverie into actuality which he transferred beautifully to screen!

The Entrance at Highclere castle has dramatic vaults and ceilings like a Gothic Church. We were asked to first proceed upstairs, using the sweeping Oak Staircase that connects the Grand Saloon to the Galleried Bedrooms.  It felt as if I was in Downton Abbey as we walked up the stairs admiring the grandeur of the woodwork combined with the red carpets lending it a magnificent look.  There are two main staircases here and this is one of them. We later went up the Red staircase to the second floor from the top of which the birds-eye-view surely cannot be missed!

Through the historic passages we waltzed in and out of 12 exceptionally splendid-interior bedrooms – each piece of furniture and linen complimenting the other in choice of colour and style. Besides other bedrooms the few of the bedrooms that had been televised in the serial Downton Abbey as Lord Grantham, Lady Grantham, Lady Mary and Lady Edith’s bedrooms were of immense interest to us. We were told that out of the 40- 50 Bedrooms on the second and third floor of the Highclere castle some of them were utilized as bedrooms by the family of the present Lord Carnarvon while some were used as offices. As witnessed in the Bedrooms, Lady Carnarvon put in immense efforts to maintain and restore them with the help of prints and drawings from the archives – which gave us a feel of the original times!

We found out that the Castle had been turned into a Military Hospital during the First World War.

Back to the ground floor we experienced the splendid magnificence of the six Staterooms, commencing with the Saloon at the center of the house that we had earlier seen from upstairs. It had an imposing 50 foot high vaulted ceiling and the stately Oak Staircase that we had climbed up earlier. Amongst the Gothic style rich decorations the hand tooled Spanish leather wall coverings were noticeable that were bought way back in 1631 by the 3rd Earl of Carnarvon but used much later in 1862 by the 4th Earl! It seemed to be the perfect background for many scenes of Downton Abbey serial.

Next we peeked into the beautiful Dining Hall adorned by the distinguished Carnarvon ancestors’ portraits that were part of the Civil war in the 1640s. King Charles I large equestrian portrait of 1635 by eminent artist Van Dyke is the most prominent and so is the portrait of the first Earl of Carnarvon by Gainsborough. Perhaps, this is also something which made them immortal! I remembered noticing the former portrait in innumerable scenes of Downton-Abbey Television serial as behind Lord Grantham and his family when he sat down for Breakfast. Moving left we entered the much televised dark mahogany wood Library with 5650 books, the earliest dating from the 16th century! In the double Library which was at its zenith in the Victorian era, the dominant colour red and its woodwork are enticing. I could imagine the 4th Earl – a Tory member of Prime Minister Disraeli’s cabinet engrossed in discussions here. We were informed that the present Earl’s family still uses it every day, which only adds to its existing charm.  Lord Grantham’s scenes in the Library of the serial Downton Abbey are memorable.

From the Library, we went to the sunny ornate Music room whose baroque ceiling was remarkable and so were the walls decorated with gilded panels and 16th century Italian embroideries. The original Napoleon era table-chair is noteworthy. Its large glass windows overlooked two beautiful structures in the distant Park- the Jackdaw’s castle in the east and the Heaven’s gate on the summit of the Siddown hill.

The Drawing room on the right is breathtakingly resplendent with walls done in green French silk in 1895 and maintained so since then! The portraits of this room are its paramount component particularly the one by master painter Reynolds. After all, down the corridors of history the Drawing rooms have always played a crucial role as a space for interaction, entertainment and display.

As we walked to the Smoking room on the right we were told that some of the 5th Earl’s Egyptian antiquities were kept in the narrow cupboards between the doubledoors of these two rooms. The Smoking room displayed the 17th century Dutch art collection along with the early 19th century Collection. By the early 19h century the Smoking rooms became an essential feature of English Country homes as furnished masculine space, fashionable in Victorian times – thus, defining their separate yet stylish zone!

We were informed by the Volunteer that the stone stairs from the Saloon led to the Basement of the Highclere castle. We imagined a scene from 100 years back with at least 60 staff members working relentlessly exactly as we had seen in the serial Downton Abbey – the Butler, the Housekeeper, the Footmen, the Maids, Kitchen staff and Stewards. We were told that that part of the shooting was done on a created set in Ealing studio in London. Many views of the spectacular beauty of Highclere gardens