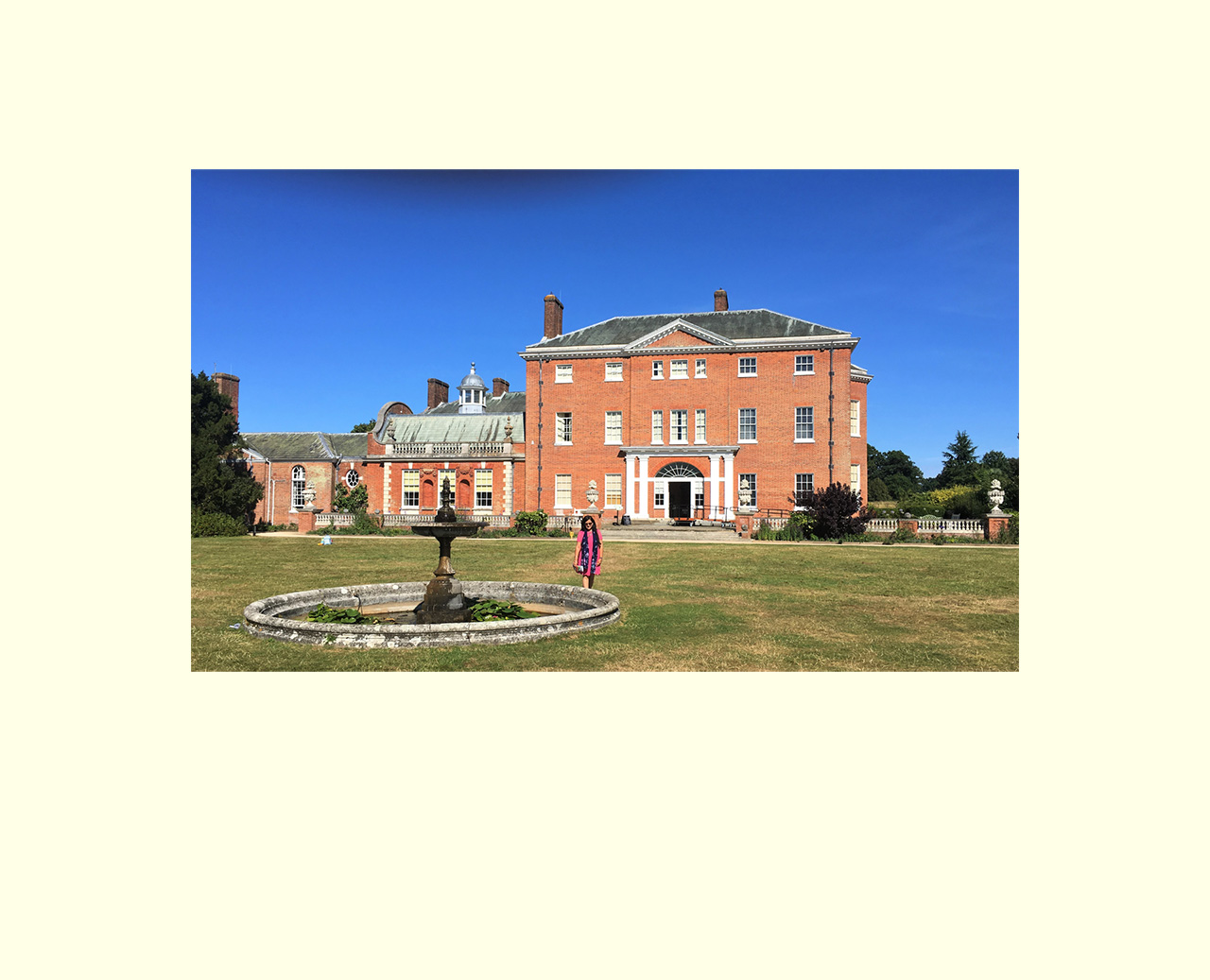 Past playful children and attractive mothers we walked towards the red brick Georgian house – the melodic world of Hatchlands Park which is home to a collection of 42 historic keyboard musical instruments connected to famous composers called the Cobbe Collection. We were in England and on our way to look up an ‘ancient estate’ held by the ancient Abbey of Chertsey for 800 long and glorified years! Walking towards the Hatchlands Park house I went over its engrossing background gathered from the hauntingly memorable framed poster People of Hatchlands Park – about those who stayed or worked there during the last 250 years. The photographs and details were so lucid and interestingly written that I almost felt being there with each of the owners!

Naval hero Admiral Boscawen bought the Tudor house and its estate in 1749 and had it redone by the then experimental but later famous interior designer Robert Adam. After he passed away aged 49 just 14 months after moving into Hatchlands Park, it was sold to William Sumner of the East India Company by 1770 who used the services of the celebrated designer Humphrey Repton, but later had to sell it to Stuart Rendel in 1888 who rose to be Lord Rendel and it remained home to them till it was handed over to the National Trust in 1945.

Since 1987 the house has been leased to Mr. Alec Cobbe whose Cobbe collection is on display at Hatchlands Park House that we had come to see.  As it is their family home we had access to the whole ground floor of the house only- six rooms full of splendid paintings, pianos and furniture! The Cobbe collection is a loan to the National Trust and alongwith the rest has a combined appeal to the tourist.

We went in through the original 18th century entrance Hall of the Hatchlands Park House that was done by the Boscawen’s designer Robert Adam with his ceiling intact. The attractive antiques were addition by Lord Rendel after 1890. Next, we entered the grand Drawing room of the Hatchlands Park House which was oozing with royalty like the silk pelmets and red damask curtains, large mirror opposite the sienna- white marble, fireplace from Robert Adam’s time, the former being additions from 1800’s. Robert Adam’s ceiling was replaced in 1860 after it collapsed trying to retain as much as possible. An additional attraction was the Pianoforte of the French queen Marie Antoinette made in 1777 by piano maker Erard in Paris that survived the French Revolution – which was indeed a landmark in history!

Besides the painter Reynolds portrait of Admiral Boscawen, the rest of the walls were hung with the portraits of Cobbes and their relations. The portrait took me down the memory lane to the time of Admiral Boscawen who played a prominent role in adding to the British Sea power by fighting many sea battles including one with the India connection at Pondicherry South India in 1748. As Commander-in-chief of the East Indies he set out to capture the French capital of Pondicherry. The siege had to be abandoned due to the weakening of Boscawen’s forces by sickness and strong French defenses.

The Saloon of several owners The Saloon interiors by sevearl owners of Hatchlands Park

The Saloon was to be the ‘Great Dining Hall’ of Admiral Boscawen who wanted designer Robert Adam to create a grand room as proven by his drawings found later. Though, it could not happen as planned due to the death of the Admiral, the room remained incomplete. Soon after the next owner William Sumner had the walls covered with silk panels to be hung with paintings behind which the unfinished Plaster panels remained. We spotted a pair of gilt console tables from the mid 18th century, probably commissioned by the Boscawens. Not to be missed is the ceiling and Fireplace by Robert Adams. Once more, the room was redecorated by Lord Rendel in 1890 too. While going out we stopped by the Harpsichord by Andreas Ruckers of Antwerp from 1636.

In 1987 as part of the redecoration plan of Hatchlands Park House, the Saloon was hung with traditional red silk to create a background for the Old Masters Paintings of the Cobbe collection that goes back to 1750 AD!

From Drawing room to Library The Library at Hatchlands Park

We entered the Library with exquisite chandelier and an ornate ceiling greeting us which was done in plaster marine designs, quite grand for a library! We soon discovered the reason that in the 1700’s designer Robert Adams had intended this to be the Drawing room for the Boscawens, so the marine designs in sync with the Admiral’s profession were created. The end of the 18th century reflected Lord Rendel’s touches – the antique gold ceiling and the Bookcases The splendid giltwood Pelmet boxes and one of the curtain valances dates to the 1800’s.

Later under the 1987 redecoration elaborate curtains, again maroon was introduced along with the walls decorated with gilt edged frames and period furniture. The Robert Adam Fireplace and the Portraits in the room are its additional highlights.

From Bedroom to Dining Room

Next we visited the Dining room of Hatchlands Park House since Lord Rendel’s residency from 1890. Before that it was the Bedroom of Admiral Boscawen along with the Dressing room in the adjoining Entrance hall. The Fireplace holds the carving of Admiral Boscawen’s dog as well as the old Robert Adam’s ceiling has been reused to create this one. We were informed that most of the interiors, though incomplete, were initiated by Mr. Alec Cobbe in the late 1980’s and were based upon the arabesque decorations- intricate foliage designs, from 18th century mansions and hotels.

King Charles II’s Virginals from 1664 caught our attention which is one of the 24 surviving English Virginals instrument.

We passed through the striking double height Staircase Hall where the grand Staircase with Georgian banisters connects to the Garden Hall again. Its compartmented ceiling and compartment walls are mid 18th century that dates back to the designer Robert Adams. Later, Lord Rendel added the wall panels with plaster ribbons, swags and cameos (like medallions) in assorted Rococo style (early to late 18th century French artistic style). Paintings were hung in these wall panels with matching frames and what we saw today at Hatchlands Park House were the surviving ones from his era. Soon we were at the 20th century built majestic Music room of Hatchlands Park House with a windowed dome in the ceiling – an addition by Lord Rendell in 1903. We had read earlier that concerts played on Cobbe collection instruments were held here – regular Wednesday and some evening concerts too. It was built in the 17th century style and now its walls are hung with fine collection of portrait prints of prominent composers and musicians!

As we went through the brochure of the Concerts at Hatchlands Park House we read that the Cobbe collection is a unique collection of historic keyboard  instruments by makers  held in high esteem and  patronized by composers like Mozart, Beethoven, Bach, Elgar and Chopin and 18 of these instruments were played or owned by them ! What we saw today were well maintained instruments in playing order or awaiting restoration. The 1663 English made Harpsichord displayed in the Hatchlands Park

One instrument attracted our attention – An English Harpsichord dated 1623 and 1720 by its rich floral decoration so Indian- style and two dates! It is few of the English instruments to have survived from the first decades of the 18th century but incorporates a soundboard from an earlier instrument!

Of Services and Kitchen

From near the Music hall we  were lead through a passage to the Tea room for refreshments, originally the Kitchen and Servant area of the Hatchlands Park House but ‘not below stairs’ as often seen in various movies and TV serials. ‘Rules of the Hall’ from that era still hang on the Tearoom wall. It was fascinating to understand the ‘Bell System’ of summoning the servants after seeing the Bell Panel Exterior that helped the otherwise ‘invisible servants to appear’.

Towards the end of the tour we saw a distinguished gentleman weave his way through us visitors and go upstairs. We recognized him as Mr. Alec Cobbe from the Welcome-photograph and message that we had seen earlier. It greeted all to their home- Hatchlands Park House, since 25 years during which they added their own fine furniture, paintings and their remarkable musical instruments which was a fine compliment to the already existing marvelous 18th century Robert Adam’s ceilings and Fireplaces .

The beautiful Gardens and its stories

The flower garden at Hatchlands House

Once outside the Hatchlands Park house we chose the Fanny Boscawen Walk as it was the shortest – 1.4 km! A memory jog took me down to the tumultuous life of Admiral’s wife Fanny who was a widow at 41 and outlived her husband by 44 years! She was an impressive letter writer whose letters not only reflected her life but also the social and political situation of that era. Besides the lovely roses and laburnums she added benches and a thatched Tea house to the Walk .The Garden’s beauty was restored in the 1900’s. Improvements in the 430 acre Parkland was made by William Sumner in 1800 and the Fanny Boscawen Walk was preserved. Besides abundance of wildflowers and bluebells the Parkland holds many more Explorers walks. It has been identified as a UK priority habitat of regional and national importance.

As we drove away from Hatchlands Park House we marveled at its revival plan by the National Trust as Family home, a place for the art lovers, music lovers, explorers and families with children that we would like to revisit again and again to unveil the engrossing lives of its multiple owners that we may have missed on a previous visit! 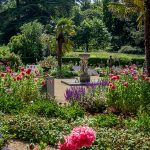 The flower garden at Hatchlands House 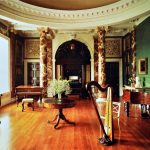 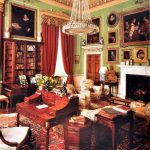 The Library at Hatchlands Park 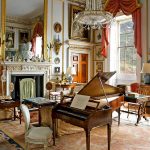 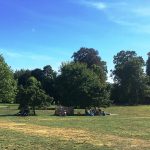 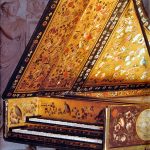 The 1663 English made Harpsichord displayed in the Hatchlands Park 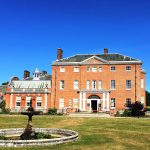 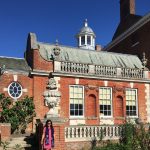 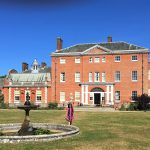 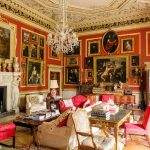 The Saloon interiors by sevearl owners of Hatchlands Park