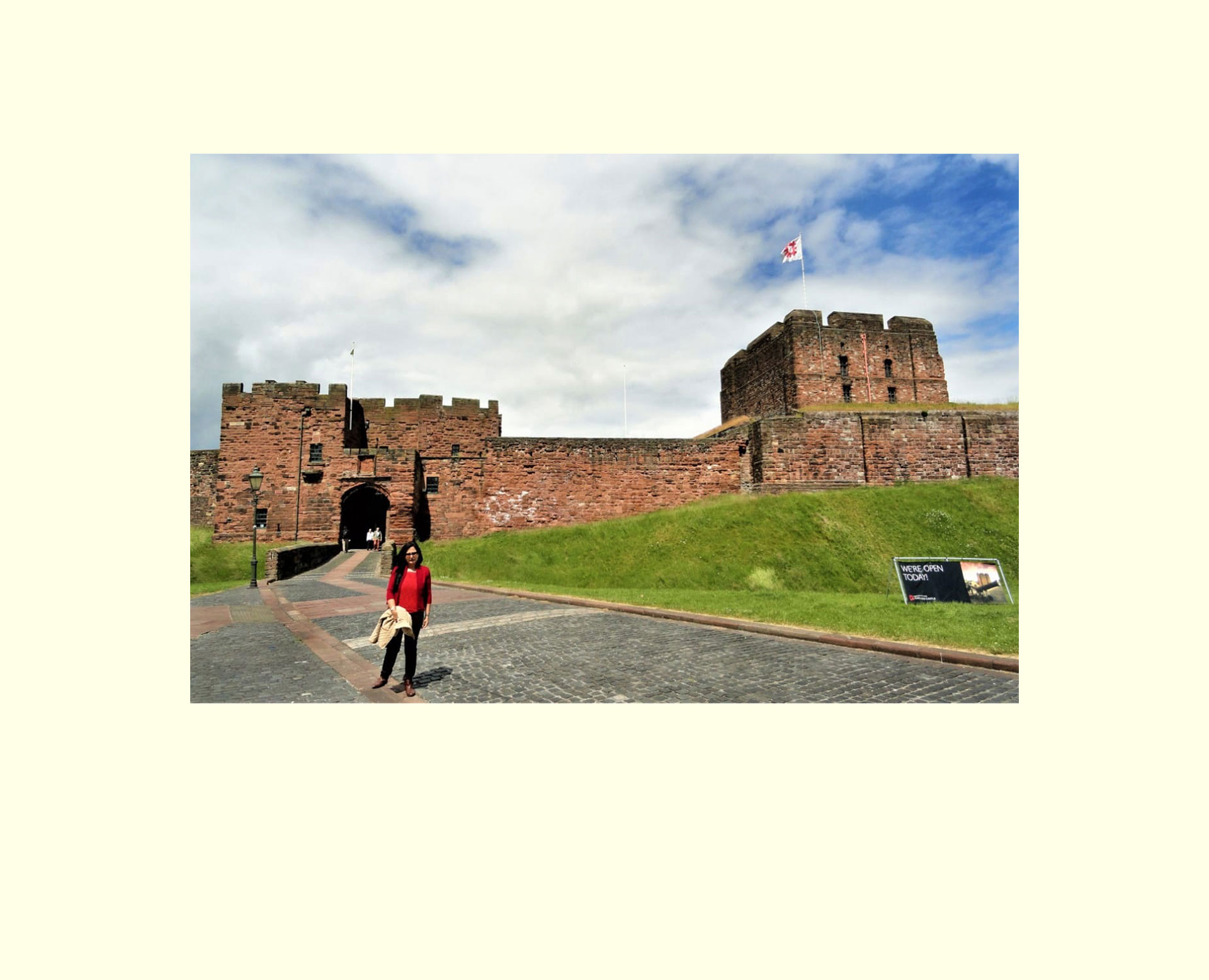 The silhouette of the ancient Carlisle Fort appeared on the skyline as we walked up the sloping pavement. We were in the quiet town of Carlisle in North England, Britain’s most besieged border town, in the past. Carlisle Fort is the first fort on Roman Emperor Hadrian’s Wall commencing from Bowness-on-Solway, which was built to demarcate his Empire extending from here on the west-coast to Newcastle on the East-coast of England. We had decided to drive along the 84 mile long Hadrian’s Wall Path Trail, a World Heritage site, stopping at all the imposing Forts that once guarded the grand Roman Empire in Britannia. The frontiers of the Roman realm, when it was at its helm, had extended over 5000 km from North Africa, the Middle East, and Central Europe till Northern Britain. We briskly walked up to the impressive elevated Entrance to uncover the Secrets, Stories and Sieges of the ancient Carlisle Fort. We looked up at the strong stone architectural wonder that had been originally a Timber Fort in 78 AD till its later construction in 122 CE to correspond with Hadrian’s visit. I could well imagine the exultation of the Roman Emperor Hadrian while ordering the creation of the mighty 84-mile long Hadrian’s Wall to keep away the ‘Barbarians from the North’. The Wall was a strongly defended frontier dotted with heavily patrolled Forts all along it, which surely was a marvel in those times. We came upon a sign that announced our choices to explore the entire length of Hadrian’s Wall in England – from Carlisle to Newcastle through the spectacular Hadrian’s Wall country. Termed as Ultra-Run some resilient souls chose to run over 2 days with an overnight camp at Vindolanda Roman Fort and finally reach Newcastle! We opted for the easiest method- effortless day-drive, narrowing it further by stopping only at Forts along the Wall that had its remnants. As we strolled inside the Carlisle Fort, the absorbing interactive exhibitions revealed several lesser known facts – the site of the Fort bounded by 2 rivers, was lived in by an ancient Briton Tribe before the Romans came and left by the 4thcentury! Further highlighted are the famous prisoners – Mary Queen of Scots and Prince Charlie – leader of Jacobean rebellion, the stories of their escape and the battles at Carlisle. The son of William-the Conqueror took over the Fort in the 11th century from the Scots. We avoided the dungeons and photographed ourselves on the Ramparts. We hurried out of the Fort for we had a long way to go and additionally had to visit the ancient Carlisle Cathedral nearby, a place of worship for over 900 years and it also served as the wedding venue of the famous poet and writer Walter Scott.

A short walk away the impressive Cathedral came onto view and a signboard welcoming visitors to this ‘Place of discovery, celebration and beauty’ set up as an Augustinian Priory in 1133. As we entered through the South Transept, a service had just got over and the atmosphere was divine. A series of Panels and a fine Model gave us the story of the Carlisle Cathedral. One panel read that a Church existed here since the 7th century and archaeological excavations of Roman period have also been found, which adds to its rich history!

We walked down the 12th century Nave towards the High Altar above which is the 14th century East Window with some original valuable Stained- Glass. Paying respects as we moved back towards the 1880 Bishop’s Throne or seat- ‘the Cathedra’ of the Bishop in a Cathedral that gives the building its name- The Carlisle Cathedral, in this case. Indigo blue and gold magnificent ceiling that dates back to the 14th century!

We were warmly greeted by the Head Priest himself who requested us to look into the mirror below on the centre table to catch a reflection of the painted magnificent Ceiling above.  That was not all though, for we had to locate Mother Mary’s face amongst the vast, minutely painted ceiling. Soon, I did manage to locate her benevolent gaze! The timbers of the indigo blue and gold ceiling date back to the 14th century though the original ceiling of the 12th century Church was destroyed in a fire in the year 1292! The ‘stars and angels’ and other ornamentations were added as part of the early 19thcentury restorations. Next, we went past the 900 year old Choir to walk through the North Aisle behind it that holds the legendary 4 Medieval Wall Paintings of the15 th century. The end of the  Aisle held an interesting display named Sensory Trail Conch cornerwhich is an area reserved for ‘Stillness’ so that we can  listen to God as well as to listen to our inner-self – the ‘Clamour of our Heart’! The next display is about a Conch or a Shell which when held to the ear transmits the sound of the air similar to the ‘Life-giving Breath of God’, swirling about you. This is analogous to Hindu philosophy of the sound of the Conch, held by Vishnu – Panchjanya,that represents life as it has come out of ‘Life-Giving’ waters. Conch or Shankh drives the Evil-Spirits away, as per the belief and philosophy.

Lastly, we headed for the underground Cathedral Treasury that displays silver Chalices and treasures from other Parish Churches. Completing our tour we took a last look at the High Altar and recalled reading previously that the celebrated poet and writer Sir Walter Scott was married here in 1797. I could imagine the beautifully lit Carlisle Cathedral as Sir Walter Scott wed his newly found love Charlotte Carpenter tied knot on the Christmas Eve!

Back on Emperor Hadrian’s Track

We hiked back to the car park, again going past the historic Carlisle fort and resumed the next part of our 84 mile journey along the Hadrian’s Wall Path Trail to our second stop; whilst I read a fair amount about Hadrian before we reached the Birdoswald Roman Fort. Hadrian born in 76 AD was chosen by his father’s cousin-Emperor Trajan as his heir! He was a military and strategic leader whose empire extended between Sahara to North England. And this formed the reason for him to stay away from Rome for 12 years out of the total of 21 years of reign! By afternoon we arrived at the scenic Birdoswald Roman Fort that had the longest stretch of Hadrian’s Wall!  At the Visitor’s centre we set out to discover the lives of the 1000 Roman soldiers who inhabited this area from 112 AD to 400 AD. To reach the Fort, we went past a large engraved stone that was erected to commemorate the opening of the Centre by Prince Charles in June 1999. The Centre held exhibits related to Roman life and archaeological finds. From there, we walked outside along the excavated remains of the Fort to come-upon the once impassable East and the South Gate. Exploring the ruins in the openness of the green countryside we were thrilled to finally come across the 2 mile stretch of the Hadrian’s Wall! The stone Wall that was in front of us was originally a turf wall rebuilt in 130’s AD. Later, after our visit to the Tea shop and souvenir store we headed for the next Roman fort along the Hadrian’s Wall – The Housesteads Fort. Main Altar at the Carlisle Cathedral