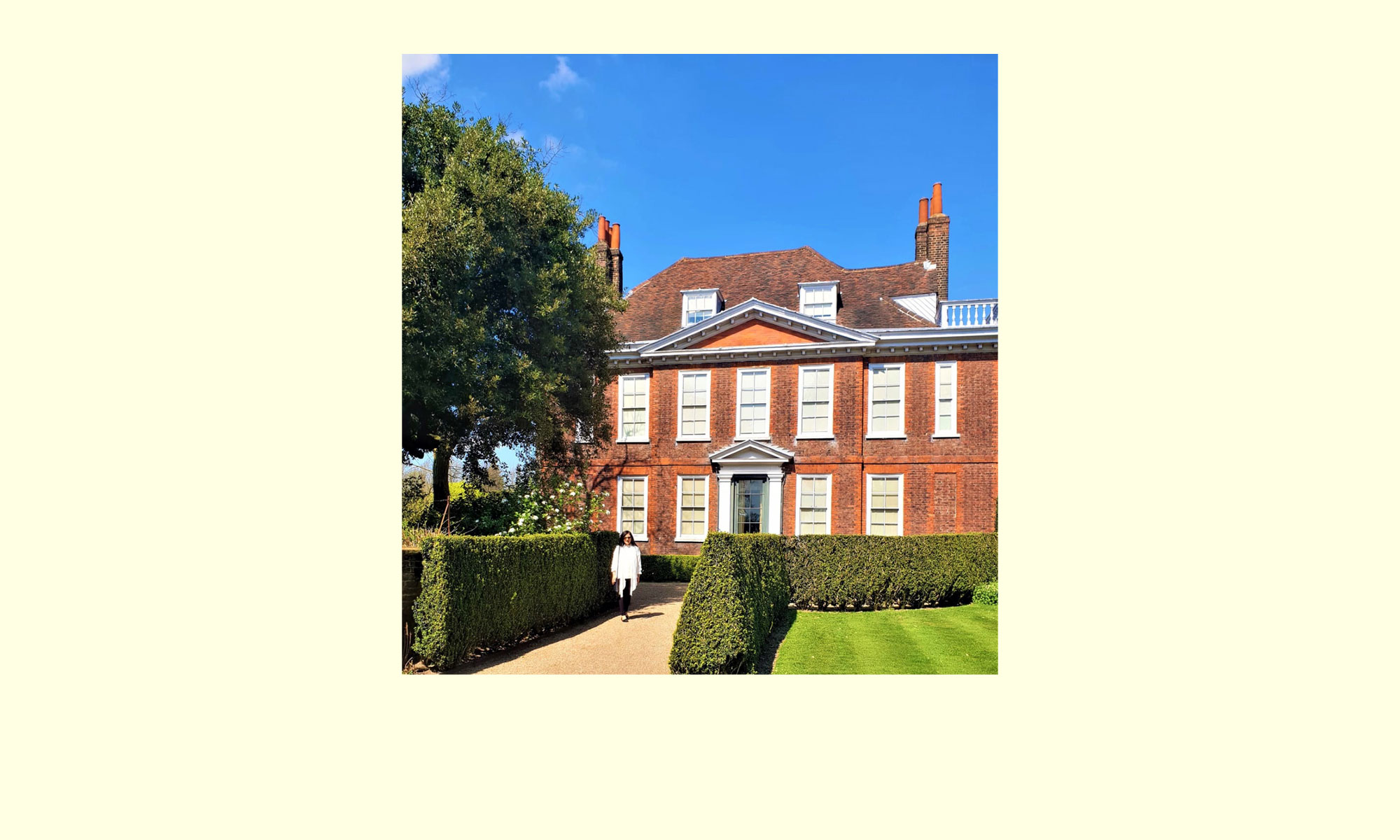 Fenton House- the art Collections at the Brick mansion

Evading the speedy life of the nearby London city we walked up the ancient Holly Hill towards the attractive yet unpretentious Fenton House. It has been named after one of its early 19th century owners. We were about to discover its fine collections spanning four centuries since 1686 AD to finally being with the National Trust in 1952 and open to tourists. The Collections stretch from Oriental & European porcelain, satinwood furniture, musical instruments, paintings, tapestries to decorative artwork.  In the due course of time, the Fenton House passed through multiple owners from various professions, rounding up the count to 17! Presently a display of unique musical instruments around the house has been added as often Concerts are organised here! Splendid grillwork at the main gate of Fenton House

Fenton house- Mansion in the Woods

We passed through an outstanding wrought iron gate from the early 18th century made by an ironworker Jean Tijou who designed gates for the Saint Paul’s Cathedral and Hampton Court Palace as well! Beyond the symmetrical garden and gravel centre path was the attractive square brickwork house with four fronts along the four directions. We entered through the East front into a passage set up with portraits where the oval- frame portrait of handsome James Fenton seems to look at every visitor and after whom the house is named!

Two in One Dining room Famous Shudi and Broadwood Harpischord in the ‘once’ Dining Hall

We entered the Dining room that had been combined with the Morning room of the Fenton house to create space. It was filled up with Ceramics, Pictures and unique furniture. The simple beautiful Dining table itself was 18th century with carved mahogany chairs. The Alcove held a 1774 Harpsichord from the famous makers- Shudi and Broadwood. The so called Porcelain room had several usages from diverse owners of Fenton House – Smoking room, Study, Sitting room, Surgery and even a Kitchen through different times! Today, there are display cabinets with hundreds of fine Porcelain figures by Meissen’s greatest porcelain-masters and many more English and European 18th century Porcelain factories. We were impressed to read lists of name of each Porcelain piece with name of the factory next it – European ones separate from English ones, a tourist friendly gesture. Walls were bedecked with pictures and mirrors from the 18th to 20th century. Moving to the next room we passed a 1612 AD Ruckers Harpischord on loan from Her Majesty the Queen of England, with a stamped Windsor accession number!

This room in Fenton House takes its name from the Chinese porcelain display here. The period of the Ceramics is neatly labelled with the name of the Chinese dynasty; the oldest being 960AD! Most of the Porcelain in all rooms is from the time of Lady Binning- the last owner of Fenton House. Entrance passage holding portrait of James Fenton, one of the 17 owners, after whom the house takes its name

We walked up the Staircase lit up with natural light from a large 10 pane window overlooking the Garden below. Past several Portraits, oldest dating early 18th century, we came upon yet another cabinet on the landing, holding early 19thcentury English-pottery animal figures.

A former Bedroom of the Fenton House is now called so after the 18th century Rockingham-China displayed here! A memory jog recalled that Rockingham pottery house was a 19th century manufacturer of ornamental and fine ware porcelain of international repute to aristocracy in Britain and abroad. Besides rare exquisite Ceramics from Rockingham, Chelsea and Bow along with pictures from 18th-19th century, the room was dominated by finest collection of 17th century embroidered pictures!

We were informed by the Volunteer that the Pictures and Needlework were from George Salting collection- uncle of Lady Binning and a great art collector of the 19th century.

Additionally, Lady Binning herself was an accomplished needlewoman so this room was a sonnet to her remarkable needlework! The wall facing the windows and the wall facing the fireplace were resplendent with embroidered pictures each holding numerous figures of people, animals, birds and scenery.

Again we spotted 2 more musical instruments from the Piano family – famous maker Barkat Shudi’s 1761 Harpsichord alongwith an oldest signed and dated Virginal from 1540! We were puzzled to see so many musical instruments which did not have much to do with its numerous owners. Display of musical instruments on the ground floor

A volunteer explained that the Fenton house had many pianos and such musical instruments displayed around as often Concerts were organised here especially on Wednesday.

They were ticketed and include a glass of wine as well as a chance to meet the performer. That seemed like an intelligent idea to attract more visitors besides the regular day-trippers! Next we entered the beautiful bedroom of the last owner of Fenton House, Lady Binning-a room that she converted into her bedroom and had the shelves installed to display her favourite porcelain collection. I recalled reading that in 1952 when she bequeathed the Fenton house to the National Trust she excluded her bedroom furniture. Years later, in 2004, using a photograph from magazine Country Life the room was redecorated and refurbished exactly as it appeared in 1950’s, perhaps in her remembrance! The furniture, ceramics, the pictures all added up to elegant pastel-interiors of the room. We came across two more musical instruments in the bedroom- an 18th century small piano called Spinet and an Italian 17th century Virginal again from the piano family. Subsequently we went to the beautiful furniture; panelled, arched alcoves Drawing room that at all times seemed to have been the Drawing room of all previous owners. Lady Binning referred to it as the China room as she had two pairs of full length display cabinets for exhibits. Unlike other rooms holding ceramic display in the cabinets or upon shelves, this was different as the China- pieces were arranged tastefully to show how to furnish the Drawing room!

Admiring the Glass picture here I remembered reading that Paintings on Glass became popular in England, France and Germany in the 18th century and Fenton House has many like these.

We were again greeted by 17th and 18th century Ceramics and splendid Pictures in the furnished carpeted Green room, originally one of the bedrooms and later used as a Dressing room too. We were told that this secondary Staircase for servants connected all 4 storeys of Fenton House. Today it held 18th, 19thand early 20th century Pictures collection on its Walls. On the landing we came across a 16th century French or Italian Buffet cupboard with splendid carving of River God Tiber and infants on it , on which Indian stringed musical instrument Sarimdah (Sarangi) was placed! We concluded our visit to Fenton house with the Attic, which compiled of 5 small bedrooms, today exhibiting a large part of the Benton Fletcher collection of musical instruments. Major Fletcher (1866-1944) embarked on his collection for the greater cause of preservation of the early Keyboard-Instruments and they were finally displayed here after his death.

The volunteer said that as Major Fletcher would have wished, accredited students came to Fenton House to practice on these instruments and Concerts were held too! He added that in the past-times the Attic rooms were used by large families of previous residents of Fenton house as bedrooms but later for senior servants too.

Each room was named according to the directions-North room, North West room, North east room, South east room, South west room and exhibited unique, well preserved musical instruments between late 16th to early 20th century. These included Pianos, Harpsichords, Virginals and Spinets of Italian, French, English and Dutch origin, each a piece of its own in musical-art!

Little had changed in the Fenton house Garden of 1756- planted with Fruit trees and Kitchen garden with an addition of flowers later. The time machine took me backwards into ‘each garden’ of the seventeen owners who had added their personal touch down the centuries!

We drove back with memories of the 17 owners of Fenton House and their splendid collections, each with an inimitable soul-stirring story of entry and exit, as time would have it! 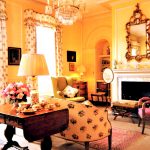 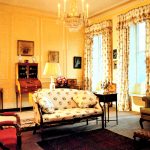 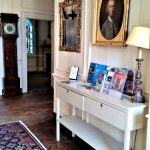 Entrance passage holding portrait of James Fenton, one of the 17 owners, after whom the house takes its name 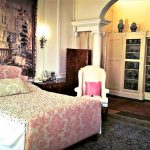 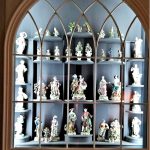 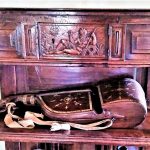 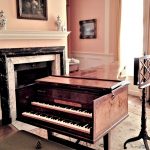 Famous Shudi and Broadwood Harpischord in the ‘once’ Dining Hall 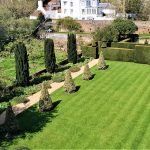 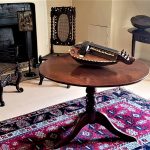 Display of musical instruments on the ground floor 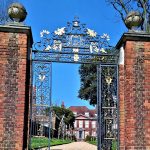 Splendid grillwork at the main gate of Fenton House 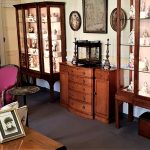 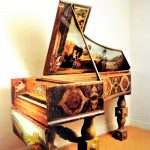 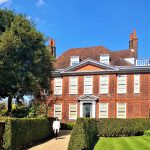