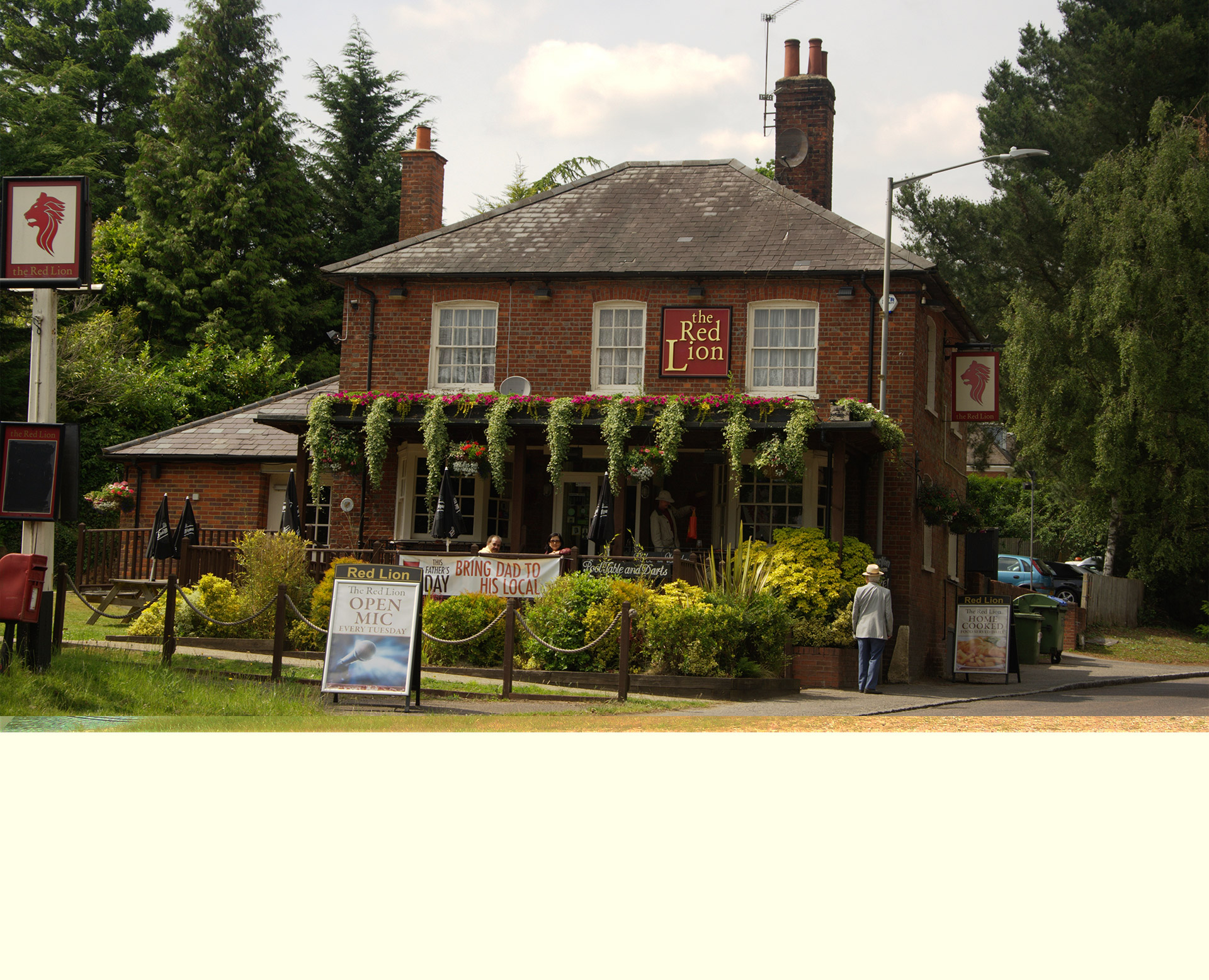 The Enchanted Village of Enid Blyton The Red Lion of the Past

Admiring the beautiful 18th century sketch of the Red Lion family Pub, it was easy for me to decipher that today too; similarities do exist except for the Horse-carriage. I was in Knotty-Green, Buckinghamshire England. We were on trail of the early 20th century celebrated English writer of children’s books – Enid Blyton whose house Green Hedges used to be just along the road outside and had been demolished now. Enid and her family had moved there from Old Thatch Cottage. She frequently visited The Red Lion Pub to write in longhand or read letters written by her readers from across the world. We got into the Red Lion Family Pub to find the Enid Snuggery – an enclosure specially dedicated to Enid’s memory. It is an Enid Blyton room with her Photos – a gallery of original prints and a library of books donated by the Enid Blyton Society. We were informed that several curious visitors came here looking for the Enid Blyton- Red Lion Pub connection. Near the Fireplace corner, famous Noddy toys of varying sizes occupied their own table and chairs. Noddy is an endearing fictional character created by Enid way back in 1949, popular till this day and thus immortal. Reading a board next to Enid’s black and white photographs, we discovered that the demolished Green Hedges home has been immortalized as a miniature at the Bekonscot Model Village nearby. Enid had written her best works while in the Green hedges home – Famous Five and Secret Seven series. Reliving Enid’s experience, we enjoyed our cup of Tea in the Snuggery and decided to head for the miniature Model Village which itself is featured in Enid’s story – the Enchanted Village and which was her inspiration for delightful Noddy Village. As we were about to leave we were informed about the sale of framed or mounted original Noddy – Covers at the counter.

After parking at the Saint Teresa’s Church we proceeded to the Bekonscot Model Village – famous for its authentic miniature houses, gardens and 10 scale miles of modern railway track. A board informed us that in its early years it was managed by the Church of England Charity Church Army and its founder Roland Callingham. The Church Army continues to manage it till now. Roland created the oldest original Model-village in 1920’s – a miniature empire portraying rural England. Every newspaper, magazine and cinema newsreel covered it as thousands flocked to see the ‘real life Lilliput’, which was a marvel for many.

More about the Models I was in year 1930 and Roland Callingham had decided to move his Indoor Railway set out of his home after his wife’s emotional speech that either the Indoor Railway model went or she did! This incident led to the birth of Bekonscot Model village to which the miniatures of 5 other towns were added to complete the magic. Bekonscot, the biggest town and the others are spread over the 1.5 acres. More than 200 buildings, 1000 animals, 3000 inhabitants, 100’s of vehicles and movable models were added! Each town has its distinct spirit and features which makes it all the more special.

We walked past Chessnade Zoo of Greenhaily town holding animal figures as old as 75 years. The additional luresbeing:  the Cricket green, Greenhaily railway station with announcements, Bekonbury Castle and Windmill. I loomed over everything and from a point I could see the entire village – the Manor house, the shops, the lake, the Church, the Railway station, the Pier, the model of Ascot Race…..and felt like being a giant in a  dream town! Actual model of Bekonscot village outside

Next is the market town of Bekonscot, the oldest part of the Model Village. We came across Cinemas, Pubs, Shops, 2 Railway stations, Fire station, Town square, Pier Marina and Life-boat station. We looked down upon the red and green sloping roofs of Waitrose and Marks & Spencer diminutive stores and peeped into the little stores for perfect detailing inside! We remembered driving past the actual Waitrose store an hour back ! Passing the Railway station with trains chugging in and out, we reached the Saint Teresa Church model where an enticing Service music was being played which rendered it a calming ambience.  It was an amazing exact miniature of the large Church where we had parked our car at.

After this the Fishing village of South pool appeared sheltered at the bottom of the cliffs with Trawlers emptying their catch where the minute facets of the Oil Refinery, Rock climbers, dry docks and Repair yards  ensnared us! Finally, we reached the tiny hamlet of Hanton where Enid’s home – Green Hedges was shaped. Enid Blyton knew Roland Callingham and held his ‘creation’ of the Model-Village in high esteem. She valued the joy that it gave to the many children and especially wrote the story of the Model-village in form of ‘The Enchanted Village’. The latter is about a walk through a miniature village that makes one feel as if one is taking a stroll in a Fairyland.

We spotted Enid’s beautiful Green-Hedges home with the sprawling lawns, rose garden, tennis courts, swimming pool and the semi circular Oak post walk leading to the large porch. This is where I imagined Enid sitting and scribbling away the ever engrossing plots of Famous Five and Secret Island series in impeccable English that holds the attention of children and adults alike, till date. A tiny replica of her with the typewriter cannot be missed. We learnt that this was the exact miniature replica of Enid’s home Green-Hedges where she lived for three decades from1938 to 1968. The mock Tudor mansion with 8 bedrooms and red roof is quite real! It had been presented by the Mayor and Town Council of Beaconsfield and unveiled by Enid’s elder daughter Gillian in April 1997, in the year of the author’s Birth centenary. Gillian said that she was looking forward to showing it to her small grandchildren so that they are proud of their great- grandmother’s house. Gillian felt that Enid too would have been very proud to know that the house was here. The Green-Hedges home had been demolished after Enid passed away and new houses were built there. On the approximate location of her house, a road named Blyton Close has been made in her memory.

From Enid’s world we headed for Splashyng town and later the Evenlode – beautiful village passing the incredible Ascot Horse Race course on a Race day complete with the horses ready for action and Enclosures full with men and women. The Manor house hotel, Waterfall, Village Green, Foxhunt across the fields, the Evenlode coal mines is all so bona fide — the perfect miniscule Epwood Castle was added later along with the wider paths owing to the increased visitors. We came across a Board displaying several neatly labeled photographs. The highlight was the group tagged Royal visits depicting black and white photographs of Queen Elizabeth on three occasions, her parents – late King George, Queen Mary and Sister Princess Margaret. When the Model village opened, it attracted attention of the Royal family at Windsor and was soon visited by the then Princess Elizabeth on the eve of her 8th Birthday in April 1930. The future Queen of England often came here with the rest of her family and later with her children too! The Saint Teresa Church outside the Model Village

The timeless magic of the Bekonscot Model Village continues undeterred by the modern technology. It is commendable that all surplus money from the tickets is donated to the Church Army and other local charities. Before we left, an ice-cream break was a must to beat the hot summer day. While driving back my thoughts centered around the enjoyable afternoon- that sometimes simple things in life is a source of immense joy. 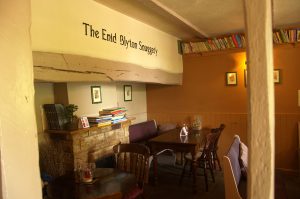 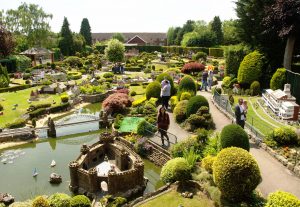 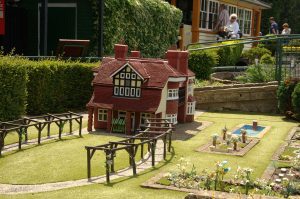 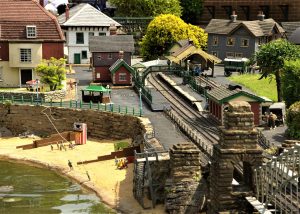 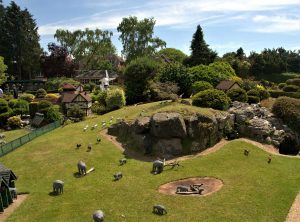 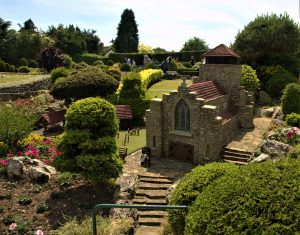 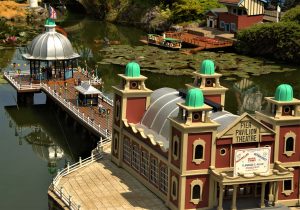 Miniature Model of Brighton pier at the Model Village 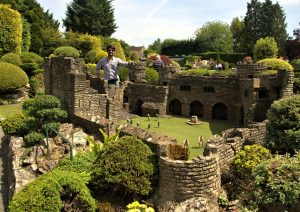 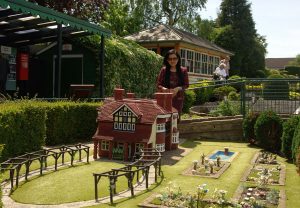 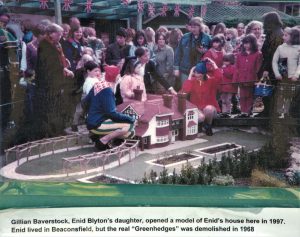 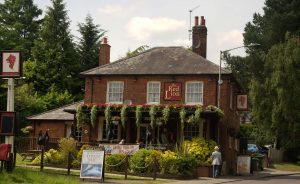 The Red Lion of the Present 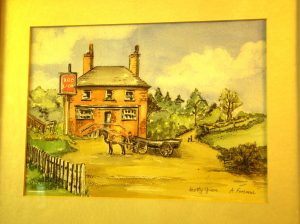 The Red Lion of the Past 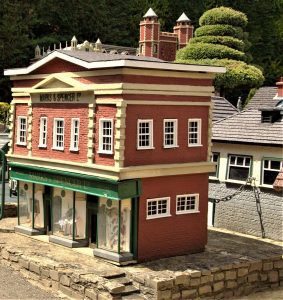 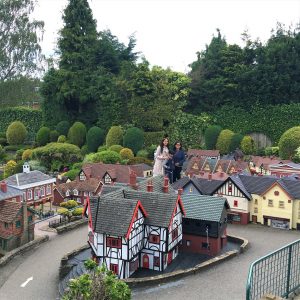 Actual model of Bekonscot village outside 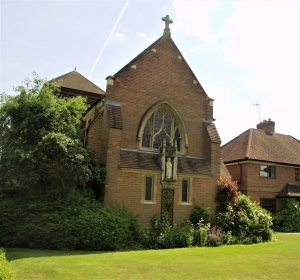 The Saint Teresa Church outside the Model Village