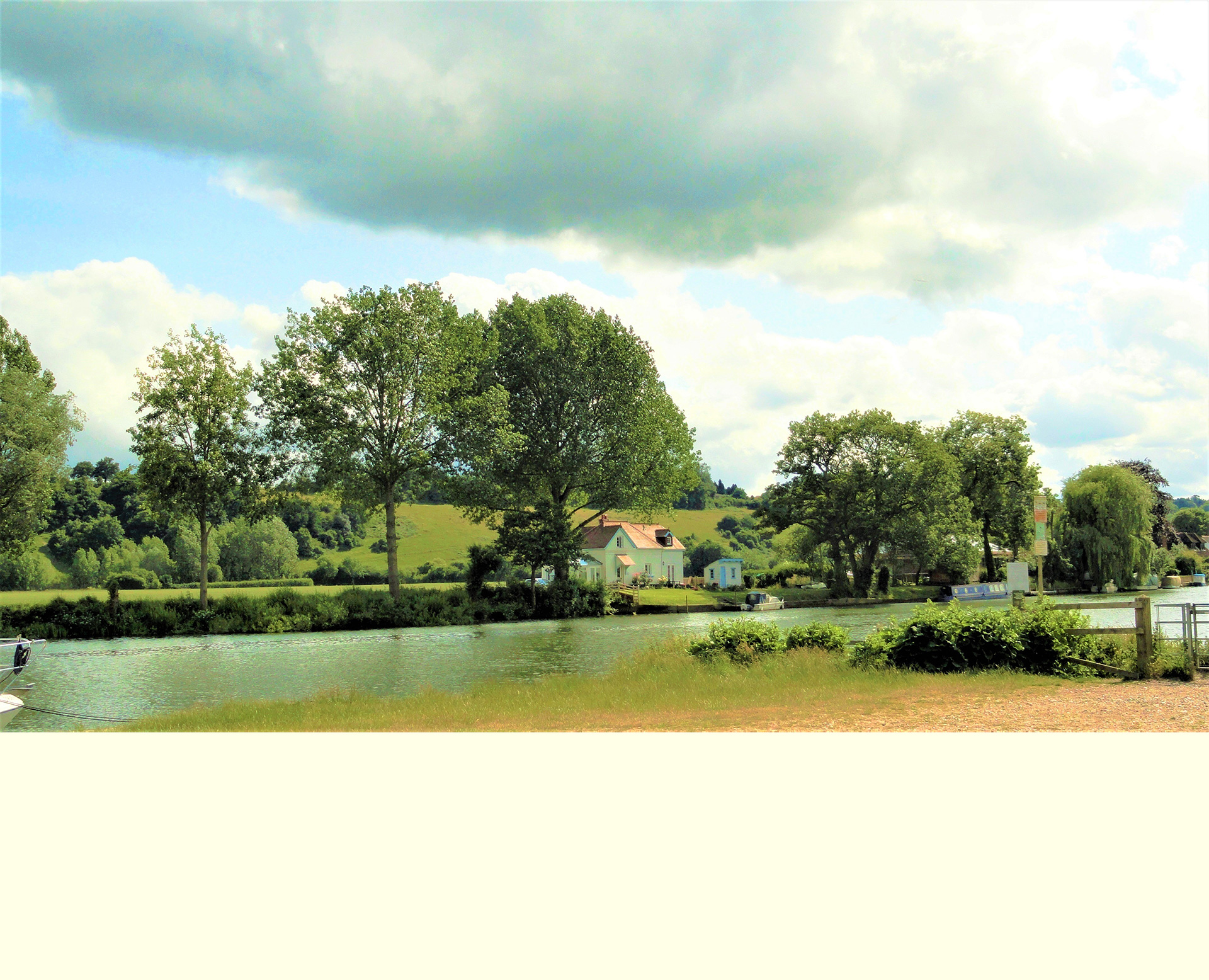 Rummaging through the heaps of children’s books at the book fair held in Delhi’s Pragati Maidan and finding stacks of titles by writer Enid Blyton, my thoughts reverted to a summer day in England.  It transported my mind to those times when we had visited Enid’s former home, the 16th century Old Thatch cottage, wrapped in picturesque nine lovely gardens by the scenic River Thames in Buckinghamshire. We entered the home of my favourite childhood author; through a small thatched low gate, half-hidden by verdant foliage.

The Gate was exactly the same when Enid arrived here in 1929 and she wrote, “I loved entering through the old lych-gate to reach a rambling cottage perfect both outside and inside that look like a fairy cottage.”

Firstly, let me brief you about Enid Blyton, which was the prime raison d`être for our visit today. She designed childhood dreams in the 700 novels and short stories translated into 19 languages and sold over 600 million copies in her lifetime! Each of us would yearn to be transformed into one of the Famous Five characters or craft a mystery like the Secret Island, my favourite school time novels – Forms at Mallory Towers. Enid was already a famed writer and married to a publisher Hugh Pollock when she shifted to the Old Thatchcottage.

While walking into the Old Thatch, I fondly remembered my childhood when I would either buy Enid Blyton books, having a preference for second hand ones from my pocket money or shuttle between the lending library and home, every other day. Even as a teenager, I read every book on Noddy in Toyland! Currently, continuing to sell 8 million copies a year in UK alone; she is irrefutably ranked as the second most popular classic-author by the English-libraries; even with the popularity of Harry Potter books, to add on despite competing with the internet and play stations.

After carefully going through the list of Do’s and Don’ts pasted by the present owners; Jacky and David Hawthorne; we entered the Old Thatch Cottage and encountered Jacky herself, behind the ticket table. The Garden – Designer couple has remarkably restored the dilapidated two acre garden and home to its original glory by introducing contemporary atypical plants along with the traditional ones which lends it another life. We embarked on the walk to the Old Thatch Cottage with the Entrance Garden which looked resplendent with reds, pinks and yellows of the summer-flowers  following the blues and purples of the recently over Spring-flowers. Subsequent to the awful winter, the flowers were slow to bloom and the summer reds had blossomed between the Spring- purples! To my right, there lied the beautiful Cottage which was once a Beer Pub and Inn till it later became Enid’s residence. The long thatched roof of the cottage was a wonder that had lasted centuries. Recently, during repairs, the thatchers found eight different layers of old thatch; the oldest layer being that of ‘perfectly preserved weeds and wild flowers from the nearest fields!!’

To our left rested tranquilly the 200-year old Formal Garden with stone paths and rectangular flower-beds mirroring the Cottage walls, doors and windows. From here we walked to the Lavender Terrace, which had been befittingly named, as the exquisite aroma of differently sized Lavenders – from tiny ones to shrubs; wafted in the environs. The Posts and Columns of old Oak and many of the Rose plants of the 100 year old Rose and Clematis Walk had been restored well. Passing through other gardens with striking names as Mr. Alpin’s Garden , Lane Garden and the Circle Garden we entered the  Water Garden with Enid Blyton’ s pond which she created with great enthusiasm, in 1930. We noticed the remains of a concrete post base that indicates tennis courts of the past-times. Besides, Enid also worked in the garden and I imagined her sitting outside tapping away at her typewriter.

The Pencil garden with over six feet tall, colourful pencils stuck in the grass in front of a wavy flower-beds brimming with attractive flowers- Begonias, was attention grabbing – as the colour of the flowers matched the tips of the pencils! Walking all the way through the nine gardens, each of them with its own singular unique style, some formal and some informal; we took a break in the traditional English Tea room inside the Old Thatch cottage. The admirable fire place was part of original low roofed dining hall for Enid’s home. Next to it, was a door presently locked, that led to Enid’s bedroom and en suite bathroom which was a fashionable extension to the old Cottage, in that era. We had read earlier that the pond, the Pergola and the Lion’s-head door-knocker have been here since Enid’s time at Old Thatch.

While Enid lived here, she was blessed with two daughters – Gillian and Imogen who were born here. She expressed her excitement about her new home with her readers saying that she ‘loved the big fruit trees, silver leaved trees, old Yew Hedges, big beds of flowers and the fine kitchen garden.’

The chatty staff at the Tea Room informed us that Old Thatch had its own  history before Enid and her husband moved in. Over two centuries back, Old Thatch had been The Rose and Crown Pub Inn; Enid’s dining room had been the original Beer room. Enid had even discovered the outline of a door that must have led down to a wine-cellar under the stables.  Interestingly, it was visited by a highway robber too! The Rose and Crown Pub closed down in 1891 due to a rival pub opening next door and has been a home since 1901 acquiring the name of Ye Old Thatch. Enid was one of its celebrity resident. The Invite given to us

Other stories allied to the Cottage are that of a ghost of a galloping horse that visits the old Thatch every year on a certain date in January and the exciting story of an old Treasure hidden here and even Enid wrote about it but it was never found! Recently, a silver sixpence dated 1696 had been found in the Garden.

As we prepared to leave, as a warm gesture the Lady at the Tea Room offered us tickets to an Enid Blyton evening including a film show. Lastly, we drove to the Blyton Close. Enid Blyton moved several homes till she came to the Old Thatch Cottage. As the children grew up, the Old Thatch seemed too small for her and she chose to move to an eight bedroom Green Hedges Cottage in 1938, also in Beaconsfield. This Tudor –style home was chosen by Enid as it was set in two and a half acres of gardens that inspired her work. While at the Green Hedges home, Enid composed many of her celebrated works like the Famous Five Adventures, the book on Secret Island and later the lovable Noddy in Toyland. After the publication of the first book of Famous Five adventure, a new title followed every year that bestowed on her the celebrity status.

We were disappointed to know that Enid’s other home – Green Hedges had been demolished and several other houses had come up in the enclosed area now named the Blyton Close, a road named after her. 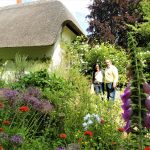 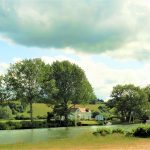 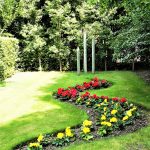 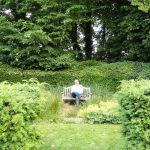 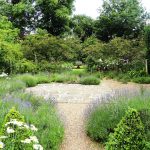 The Lavender Garden leading to the Water Garden 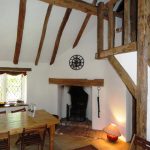 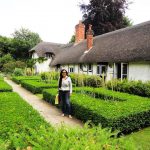 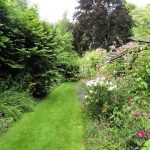