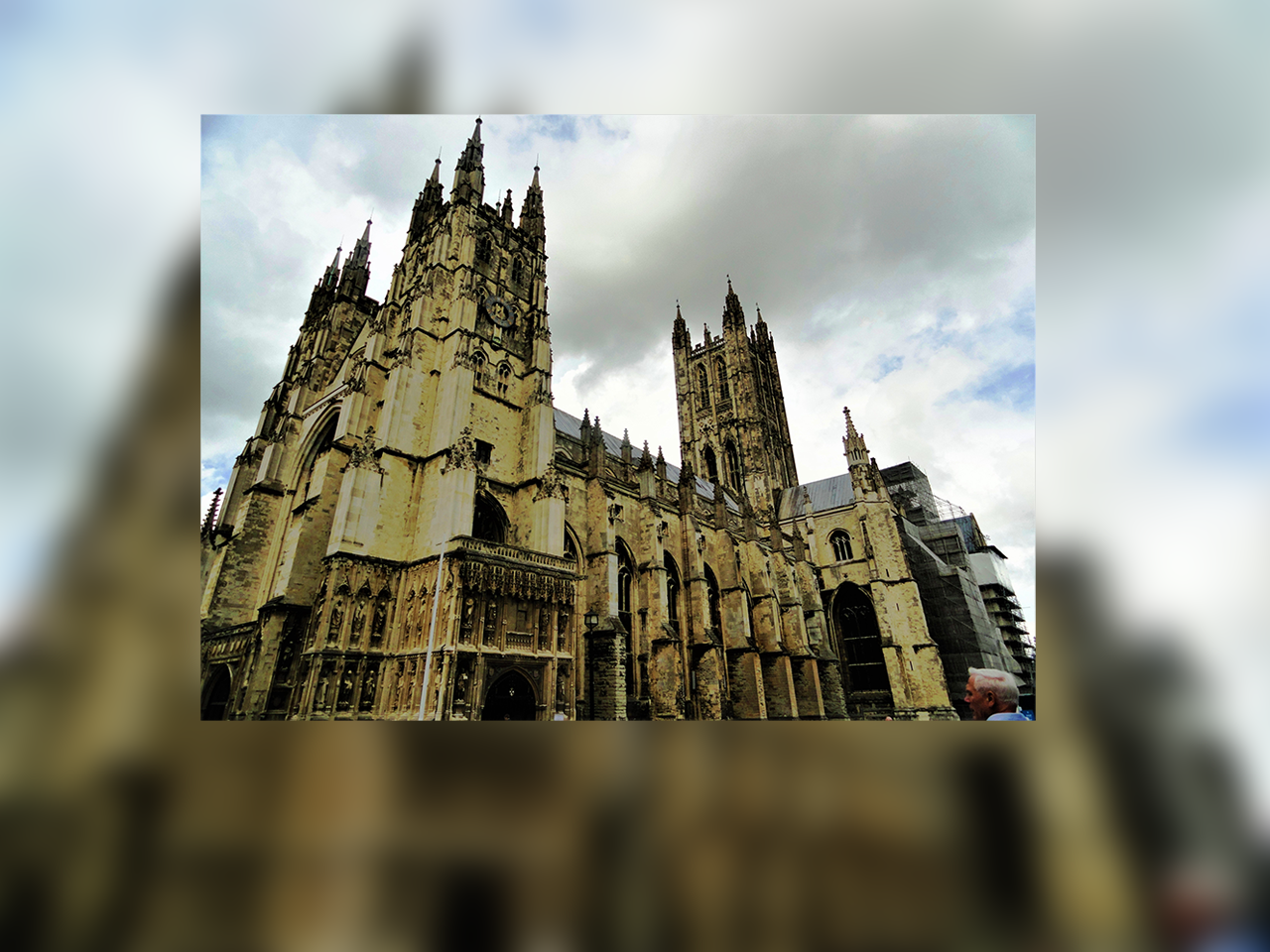 Whether it is Christmas time in the snowy landscaped cold winter or the cool summer holiday months, a trip to Canterbury in England is always exceptional. This renowned Church town in England, holds the medieval Canterbury Cathedral. The historical, yet new in its own way, modern city of Canterbury captivates thousands of tourists and  pilgrims, primarily due to the Cathedral, along with other remarkable tourist attractions. It is an architectural marvel amongst the list of Churches of the world. The Canterbury City is an amalgamation of culture and heritage; whether we explored the splendid Canterbury Cathedral or the maze of its streets and museums. Its beauty is best explored on foot, on a bright English summer day. And needless to mention the English Tea-shops are a must visit too. While in Canterbury the memories of reading Geoffrey Chaucer’s, 14th century Canterbury Tales come alive which are famous poetic collections of stories that form an integral part of English literature. The Canterbury-Tales are presented as verse and prose in a story–telling  contest, by a group of pilgrims  visiting Saint Thomas Beckett’s shrine, in the Canterbury Cathedral; an eminent pilgrimage. Since 1700 years Canterbury has been a Christian pilgrimage which has now developed into a tourist spot too. It is the seat of the Archbishop of Canterbury (chief Bishop of England). Taking a dig into literature history; the word “Cathedral” is derived from “Cathedra” which means a chair and hence the seat of the Archbishop since hundreds of years. In the Middle-ages Canterbury was at par with Christian pilgrimages of Rome and Jerusalem. It is one of the oldest churches of England whose history dates back to 597 A.D. when Saint Augustine was sent by the Pope to re-establish Christianity in England as sunset on the Roman era. The Cathedral had massive religious and political significance in the medieval times.

Additionally, the Cathedral holds shrines of several important Saints; amongst whom those of Saint -Augustine and Saint Thomas Becket are most prominent. After the murder and martyrdom of Archbishop Thomas Becket in 1170 on the orders of Henry II, the Canterbury Cathedral became a popular pilgrimage. A candle burns where the Shrine of Saint Thomas of Canterbury stood from 1220 to 1538 when it was destroyed by the order of atheist King Henry VIII, who it is said believed himself to be above God! The original shattered Shrine blazed with jewels and gold.

The magnificence of Canterbury Cathedral

From far; the skyline is dominated by the tall Gothic character with tapering towers of the Canterbury Cathedral which is a fine example of Roman, French and English architecture as structures were added over the centuries. The Bell Harry Tower with a massive bell stands out as a remarkable configuration which is one of the ‘newest additions’ made in 1500 AD. The Nave on the ground floor

Entering the Cathedral from the huge engraved door the heart and mind crossed all religious boundaries as we stepped into the exhilarating Divine presence. The beauty of the Nave enchanted us with the splendid carvings, holding black and white marble steps. Traditionally, all churches are built in form of The Cross and Nave is the central part of the Cross. In 1995, excavations below the Nave floor yielded the remains of a Saxon period Cathedral, which was built across a previous Roman road for strong foundation! Saxons were originally Germanic tribes who settled in large parts of Great Britain in the Middle-ages and since then are an inbuilt part of culture and society here. From the Nave we walked down the worn off  old, staircase to reach the lower, central area and Crypt– the basement of  the Church with  more Grand Arches, carved Screens, Columns, Ceiling and exquisite Stained glass windows .  The Crypt- the last resting-place of many significant Saints and Royals; is an ethereal spot, the spirituality and tranquility of which engulfed us. I looked around at the rows of hundreds of tea lights twinkling the Wishes and ‘ Thank you’s’ of the visitors, as I added my own tea light, in one row. The latest 20th century addition is the statue of Mother Mary and Baby Jesus which form the main attractions here.

Next, we climbed up from the calm silence of the Crypt to the floor above this area – the Quire (read Choir) which is a masterpiece of architecture that holds 297 meter high pointed arches and tall pillars all around it! The increased height is due to the Crypt below it. The grandeur of the Quire is breathtaking. The Church Songs and music is played here that makes one feel the ‘delightful existence’ and thankful at the same time for one’s presence here. The 12th century Stained-glass-windows of Canterbury Cathedral is an excellent example of English Art that represents scenes from the Old and New Testaments. The 1000 year old art of Stained-(coloured) Glass was used in the Churches to present religious scenes and incidences. The Quire can be reached from the Nave too, by walking straight ahead, as it is at the same level.

After browsing in the Souvenir shop we walked around the vast Cathedral. Today, the Canterbury Cathedral is a World Heritage Site and also an International Study Centre is attached to it which is visited by scholars, pilgrims and tourists from world over.

Besides the visit to Canterbury Cathedral; the river cruise and visit to museums is also a must, whilst in the town. The Canterbury Tales museum is an interesting option to experience the 14th century adventure with lights, sounds and smells that made us feel part of the pilgrims group travelling to Canterbury and narrating the stories to each other on which the famous Canterbury Tales are based. Canterbury Tales is a 24 stories collection of over 17000 lines written in Middle English by Geoffrey Chaucer!! Writer outside the Canterbury Cathedral

The Roman museum exhibits the significant discovery of a Roman Town buried below today’s Canterbury, some dating back to 150 AD! During the bombing of World War II, Roman Townhouses with excellent mosaic flooring were discovered too. We also read about illustrious Roman Emperor Julius Caesar‘s 54 AD visit, near Canterbury.

While driving back we recollected what all Cathedral had witnessed, it had survived the damages of the Civil War of 1640’s and the World War II but looking at its impeccable condition and stunning architecture, it was hard to believe that! 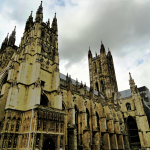 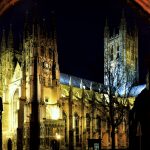 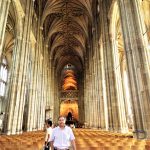 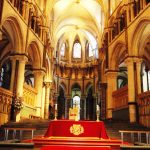 The Nave on the ground floor 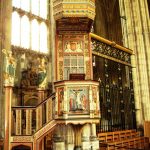 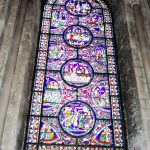 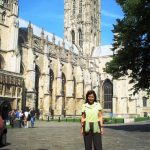 Writer outside the Canterbury Cathedral