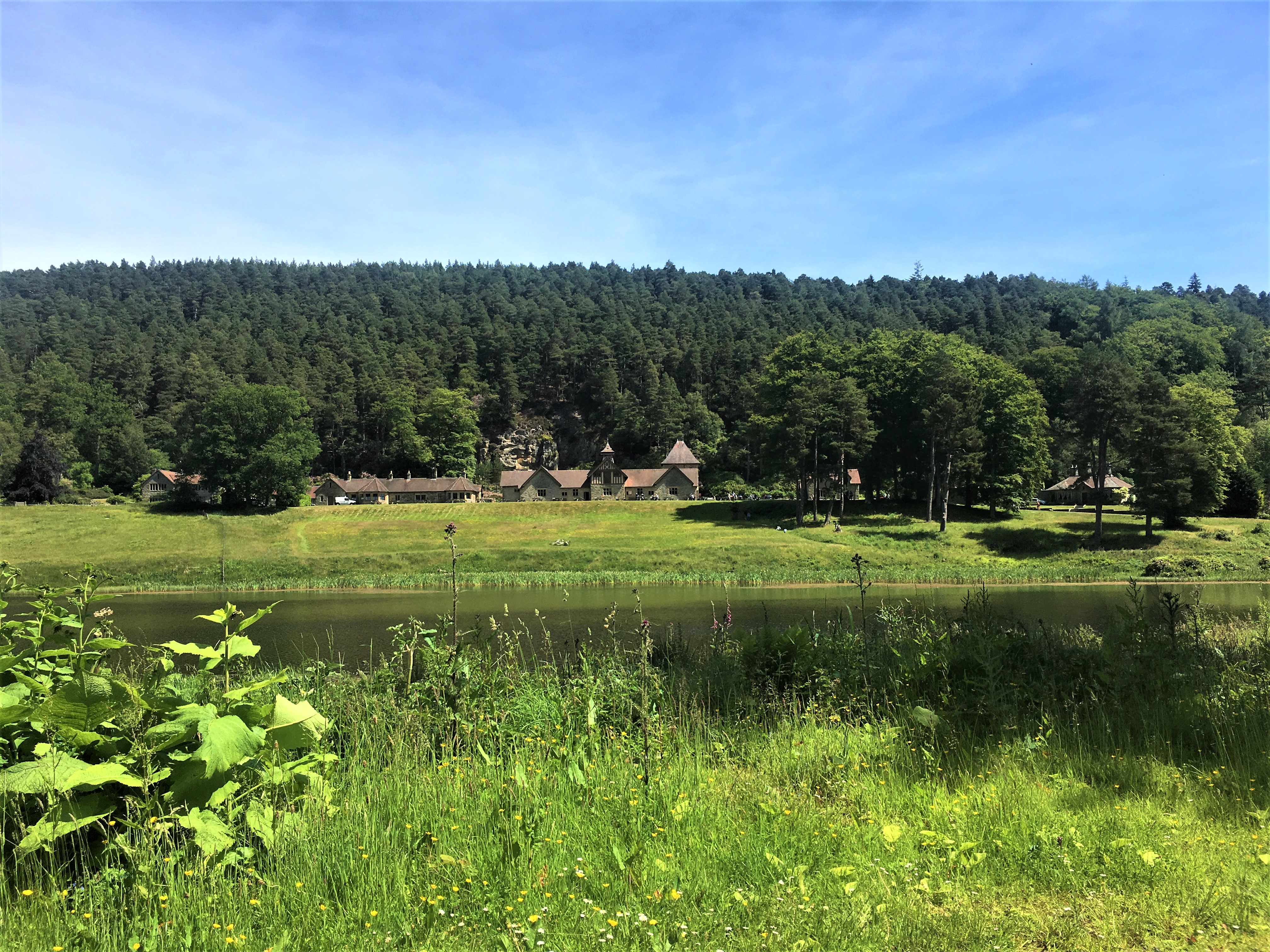 Across the sapphire blue of a lake we caught the first stunning view of the 19th century Cragside house on a hill slope and acres of rugged woodland, spectacularly located. We were in Northumberland England and had set out to explore the first home to be lit by hydroelectricity – Cragside house of Lord Armstrong in 1878! I stepped into the time machine to watch Lord Armstrong take a break in the secluded superb valley linked to his childhood, away from the business pressures and run of the mad mundane lifestyle.

Additionally, little did we know, we were to discover rare Indian paintings too!

About Armstrong- the person

Walking uphill from the car park I felt I was in a Himalayan hill station, so close were the similarities. My thoughts turned to Lord Armstrong whose personality was an amalgamation of an industrialist, a scientist, a lawyer and an engineer too and yet remained unaffected by his success! No wonder he harnessed the power of water to create Hydraulics to lift heavy weights leading to ‘hydro-electric’ machine to generate electricity! His other achievement was in gun making and final accomplishment was building warships. Correspondingly, Cragside was a comfortable 19th century house with ingenious gadgets, which must have been a rare sight during those times! Soon we were in a vast open area that led us to the magnificent landscapes Cragside House built in 1864-66 from stones of a local quarry giving it a deliberate medieval look. Little had Lord Armstrong thought, when he build it, that this modest weekend resort would one day be his beautiful country mansion in the coming 15 years entertaining worldwide royal guests!

Escaping the blazing sun we entered Cragside house through an Entrance Hall and were first shown into a small Study where Lord Armstrong’s portrait at the age of 21 welcomed us. Once the Sitting room of Lady Armstrong it was later changed to his Study.

We were surprised to see a whole room adorned with Japanese mementoes and gifts and were told that it was dedicated to the friendship of the Armstrongs with the royal Tokugawa family, especially an uncle of the Empress of Japan! Most notable amongst Cragside visitors have been the present Emperor (when Crown Prince) in 1953 and his son, the present Crown Prince in 1991.

From a Weekend Home to Permanent Home Now we were at the other end of the ground floor and were about to witness the first two extensions to Cragside house in 1870-72, one being the Dining- room and the other the Library next door. A volunteer added that with the advent of the railways it was easier to travel so the Armstrongs decided to spend more time here and added two rooms which till today stand as the  finest examples of Victorian interiors.

We entered a well lit room with an extraordinarily designed carved stone Fireplace, Family portraits adorning the walls and Stained glass windows that are specimens of finest craftsmanship! I wondered if the two Dining tables had separate usage while eating – one for panoramic window view and the other near the Fireplace for warmth! One can always take the liberty to think laterally while visiting an artistic home. We were thrilled to know that we had stepped into the first room in the world to be lit up with Swan’s newly invented Light-bulb with Lord Armstrong’s first water powered dynamo producing Hydro-electricity! The beautifully furnished Library in warm reds and browns, blue tiles and Onyx panels Fireplace, glowing electric lamps with low bookcases had splendid views of the emerald valley which added to its existing richness. It was also the favourite family room since 1872. The plentiful light, high ceiling 19th century Kitchen along with labour saving gadgets engineered by Lord Armstrong was like a scene of celebration of culinary activities, once bustling with happy staff! Most of the food came from the Armstrongs farms, gardens and orchards. The Butler’s Pantry, the electric bells, the old washing machine, the Lift to carry coal & cleaning equipment, a turbine to operate Kitchen roasting-spit are sure attraction! We climbed down to the unique Turkish Baths that were a major attraction to Lord Armstrong’s business guests- the Japanese, Burmese or Chinese ministers in the Northumbrian winters! Entertained and comfortable, the Arms contracts came more easily!

Back on the ground floor we proceeded towards the Stair Hall that held elegant wooden stairs with beast sculptures on the posts which embraced electric light fittings! While in the Boudoir I stepped back in time to see ladies of the house indulging in favourite Victorian pastimes of painting and sewing. Despite the restorations the 19th century, original rug and carpet from India remains intact in its place. Subsequently, we visited attractive names 19th century bedrooms – The Morning room, the Yellow and White bedrooms, The Bamboo room and the Armstrong room with the finest furniture and furnishings. It was exciting for us to discover India connexions in North England. Besides the carpet in the Boudoir we came across a large painting- ‘Released Garrison of Lucknow Crossing the Ganges – Cawnpore’ 1857. It was indeed a beautiful photograph like landscape of rows of soldiers on horses, camels and elephants crossing river Ganga with a temple in the foreground. There was another eye-catching 19th century watercolour on paper of the Tomb of a Moghul King near Delhi about which I had read an article by an Asiatic society member. Next, was a panoramic view of hill station Darjeeling – these all were part of Cragside accredited museum. We profusely thanked the helpful volunteer who printed the India collection for us to browse at leisure from their website! We moved into the spectacular, arched stone Gallery with remarkable wooden panels adorned with paintings, sculptures and display cabinets set on a huge red woven carpet and roof-windows. I recalled reading that it was originally built as a private ‘museum and study’ for Lord Armstrong’s scientific and geological specimens but after a later addition of the Drawing room it was transformed into a passage too. A memory jog down the year 1878 took me to a ghostly looking passage with shadowy arch electrical lights! At the far end of the gallery is the superlative part of the tour- the prime extension to the main house completed in time for the royal visit of Prince and Princess of Wales in 1884. It is a colossal room with intricate exquisite plaster panels on the arched ceiling and fireplace that end at the central natural-skylight creating a mesmerising effect! Sadly, after Lord Armstrong as the family fortunes gradually dwindled and in turn the room went out of regular use and many paintings were sold.

On our way back we stopped at the famous Owl suite. The grandest rooms in Cragside were designed for important Arms-customers from abroad- The King of Siam, The Shah of Persia and the Crown Prince of Afghanistan all slept in the owl carved big black walnut bed in the suite. Added luxury was in form of a Sunken-bath and Wash-stand in the adjoining Dressing room!

Of Resplendent Walks and Gardens Once outside, one cannot help feeling a bit disoriented at the sight of multiple paths across the 1700 acres of pleasure grounds planted with thousands of conifers, rhododendrons and alpines on the once bare slopes! It must have taken a humongous effort by Lord Armstrong to blast the hillside to expose craggy rock formations! We chose a scenic drive with dramatic views to the tranquil Lakeshore with vast expanse of shimmering water and sprawling woodland around, reflecting in the water alongwith the twinkling sunshine – which remained a surreal image in our memory! 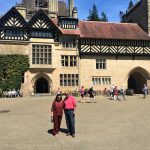 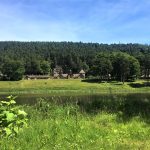 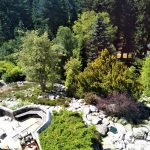 View from top of the House 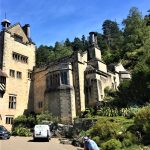 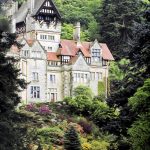 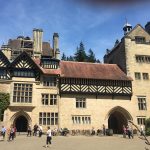 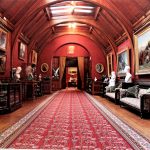 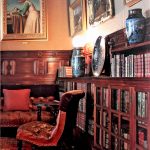 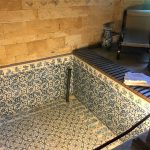 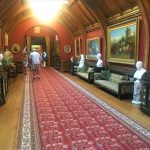 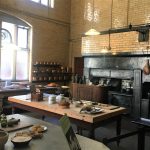 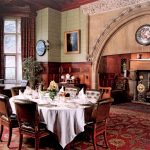 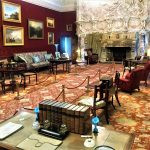 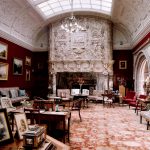 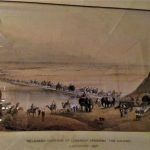